Home » Jazz Articles » Albert Ayler: Music Is the Healing Force of the Universe 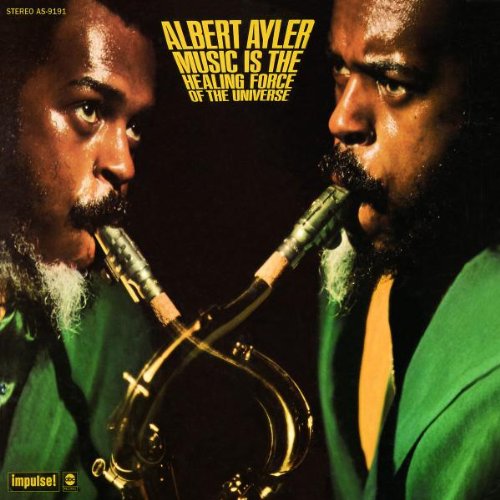 Albert Ayler was a true giant who walked this earth far too briefly. Thankfully, he was able to leave behind a fairly substantial body of work and Impulse! finally saw fit to issue one of his last albums to CD. Recorded in August of 1969, a little more than a year before they fished Ayler out of New York's East River, Music Is the Healing Force of the Universe may not be one of his best moments ( Spiritual Unity ) or even his oddest ( New Grass ), but it's still essential and rewarding listening for those with a hankering for the fire music.

As soon as Albert Ayler's first earth-shattering deep tenor roar opens the album, shivers are running up and down my spine. Nobody else has made a sound from a horn quite like that - a truly holy bleat.

Unfortunately, I'm considerable less enthralled with the vocal and lyrical contributions from Mary Maria that somewhat clog up the album, or at least the three tracks where she sings. Especially embarrassing are the lyrics to "A Man is Like a Tree," a tree is like a man - sheesh. On the other hand, especially if you ignore the lyrics, the interaction between Parks and Ayler can be exciting, and quite deep.

Bobby Few (still on the scene today - check out his excellent 2002 release from Boxholder, Continental Jazz Express) provides a much more vital and awe-inspiring contribution with his wild piano cascades. And you have to hear Ayler's take on the bagpipes from "Masonic Inborn (Part 1)," which begs the question - is there a part two languishing in the vaults somewhere? An overwhelmingly powerful track, and also the longest on the album. Check out Muhammad Ali's fantastic drum solo and the bass work from Bill Folwell and Staford James. By far the strangest song on the album must be, "Oh! Love of Life," which features Ayler's high-pitched, haunting vocals, as well as his monster tenor work. It really feels completely on the edge, completely nuts.

From there the album winds down somewhat disappointingly. Despite the powerful musicianship, "Island Harvest" (with another goofy vocal from Mary Maria) seems like B-side material at best (ugh - that fake accent!). The final track, "Drudgery," is a completely baffling, long, lame blues-rock jam thing, that doesn't fit with the rest of the album in the least. Henry Vestine even steps into the room to lay down some very by the numbers blues guitar. I'm shaking my head, wondering what the hell were they thinking. It's so wrong it's actually somewhat interesting.

To hear this free-jazz icon stuck over this track is simply and utterly bizarre.

Impulse! on the web: www.vervemusicgroup.com.

This review originally appeared in All About Jazz: Los Angeles .

Music Is the Healing Force of the Universe, Masonic Inborn (Part 1), A Man Is Like a Tree, Oh! Love of Life, Island Harvest, Drudgery

Nothing to see here... move along.