BY GLENN ASTARITA
December 10, 2018
Sign in to view read count 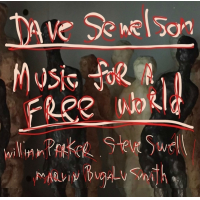 This is baritone saxophonist Dave Sewelson's (William Parker's Little Huey Creative Music Orchestra, Microscopic Septet) first recording as a leader since the 1979 release, Synchro-incity for the TFYM record label. Indeed, that's a long stretch, but Sewelson seems to be busy collaborating with others, and is a veteran of New York City's bleeding-edge downtown scene. On this album, his unorthodox phrasing, extended techniques and reverse-engineering processes standout as a major source of interest, while leading this all-star quartet that features longtime collaborator, bassist/composer, William Parker.

These semi-structured pieces are complex, dynamic, cunning and brimming with fierce and stoutly presented improvisational encounters. For example, "Music for a Free World" starts with the leader's swaggering statements, revved-up with drummer Marvin Bugalu Smith's up-tempo breakouts as the free-form element starts bulging at the seams, anchored by the great bassist's pliant undercurrents. Throughout, the band bridges strength and agility, incited by Sewelson and consummate trombonist Steve Swell's monstrous dialogues. Yet, during the bridge, Parker executes a super-speed arco motif, summoning an ominous event or perhaps social chaos, followed by the frontline's reemergence, and Sewelson's twirling phraseology.

The quartet emits a veritable organic force field on the 21-minute piece, "Tensiana." With a ballsy and fractured free bop underpinning they employ rubato and use space to their advantage, amped by the saxophonist's popping lines and Swell's bold and bronzy soloing. Smith even tosses in some off-kilter funk beats on occasion as the soloists take charge with a vengeance amid odd-metered time signatures and scrappy choruses. The band doesn't rest on its laurels by navigating the same routes. In effect, the artists' diverse frameworks sustain interest via mutable plots and a tenacious, in-your-face disposition.

At times Sewelson makes his sax groan, cry and whisper. On "Calm Pose" they render a mid-tempo free-form gala atop Smith's punishing assault as the soloists stay behind the pulse to generate a some contrast along with dueling outbreaks and Swell's scorching solo. The final track "Bill" is a composition that honors the late guitarist, Bill Horvitz, who to some extent was Sewelson's mentor many years ago. However, the artist picks up the sopranino sax to finalize the program with a melancholic ballad, topped off with his winding lines and lithesome note-bending sprees above Parker's nimble support. Here, Sewelson's performance is largely about hinting at a primary motif, and through some (unintended) trickery he slowly dances around a melodic tonal sequence without explicitly playing a harmonious theme. Thus, it's an imaginative proposition, and snugly falls in line with this rather enthralling affair, where the leader and his associates seemingly celebrate freedom for all mankind with a jubilant and deeply personalized rendering of the jazz idiom.