BY GLENN ASTARITA
January 8, 2010
Sign in to view read count 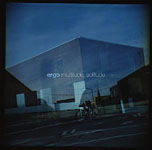 Keyboardist Carl Maguire is a multifaceted artiste, often-heralded for his work in various jazz-related formats for Between The Lines, MoonJune Records and other progressive record labels. On this trio's second CD, Maguire, trombonist/computer operator Brett Sroka and drummer Shawn Baltazor spawn an experimental muse, where rigid definitions or categorizations, justifiably fall flat. Essentially, the respective artists rely on synergy and intuition to get the job done. And that is a good thing, since the cutting-edge aspects translate into an endearing mode of entertainment that is engineered upon various acoustic-electric abstracts.

"Endlessly (multitude, solitude)" is steeped within a quaint, and well-defined vibe, as each keyboard or computer spawned riff has significance. Sroka then raises the pitch to supplement Maguire's linearly executed effects and synth patterns. Here, the musicians intimate imagery of ascending towards a zenith, then drifting into an abyss. In other regions of sound and scope, they render a few avant, crash-and-burn movements, firmly entrenched in a free-flowing improv impetus. Ergo synchs up rather nicely, as intuition plays a vital role throughout. Hence, it's an oscillating and persuasive venture into a cosmic void, where no hard and fast rules apply.