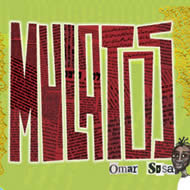 "File under Latin Jazz" reads the message to the retailer on the cover of this adventurous, finely wrought and wholly delightful melange of Cuban jazz, Latin dance grooves, French chanson, North African trance music and European folk. And yes, it is Latin jazz, Jim, but not as we generally know it.

Less a conscious, structured world music fusion than some of Sosa's previous projects, and more a free flowing collaboration between musicians from different cultural backgrounds, Mulatos falls into none of the usual world jazz pigeonholes and is very much the product of the particular group of musicians—two Cubans, two North Africans and four Europeans—who recorded it. Most of them already have distinguished genre-busting and musical-miscenegation track records. Tunisian oud master Dhafer Youssef has this month been touring the UK with Norwegian nu-jazzers Arve Henriksen, Eivind Aarset, Audun Erlien and Rune Arnesen (their performance at the London Jazz Festival was sublime). British drummer Steve Arguelles—who produced Mulatos and recorded it in the main in his adopted hometown, Paris—is an alumni of London's idiosyncratic and culturally inclusive Loose Tubes, and German bassist Dieter Ilg has made some fine jazz-meets-folk albums (two of them, in the late '90s, with Arguelles).

Sosa's humanism, as always, shines through the album and there is a sunny, healing quality running through the set, which is essentially chamber music. Like a European chamber orchestra, the lineup is pared down, the featured instruments are those from the more intimate and mellifluous end of the tonal spectrum, and the performance itself is concerned with subtleties, miniatures and vignettes rather than big events and grand climaxes.

Arguelles's production is appropriately loose limbed and light of touch, scrupulously avoiding the over busy and allowing every constituent part of the music—be it a melody, a rhythm or a texture—to have space and breathe. Sosa solos frequently, mainly on piano, and Paquito D'Rivera and Renaud Pion keep the clarinets centrestage much of the time, but there are also several magical and unexpected duets and trios between Sosa's battery of tuned percussion, Youssef's oud (with its occasional touches of Flamenco guitar and Italian mandolin) and Ilg's fat, expansive basslines.

Music to lose yourself in, and to revive your spirit with.