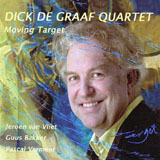 Tenor and soprano saxophonist Dick de Graff has built an impressive catalogue of 120 original songs over the years and has been a well-known fixture on the European scene for decades. De Graaf, originally from The Netherlands, is now Rotterdam-based. His recordings consist of over a dozen albums as leader or co-leader. Although he has a reputation for contributing original material to his performances, de Graff also has been well-known for borrowing compositions from such rock musicians as Jimi Hendrix, Sting and The Who, in addition to utilizing themes from Beethoven and Schubert.

De Graff is involved in a tango project called Trio Nuevo (Soundroots, 2006), however his work on Moving Target is solid mainstream blowing. The ten tracks are evenly divided between compositions inspired by classical composer Béla Bartok and a series of jaunty bebop numbers. There are a few distractions, such as when on an otherwise tasty opener, "Cascade," drummer Pascal Vermeer plays partially outside of the beat, while Jeroen van Vliet insists on playing electric keyboards on at least four of these tunes. "Stolen Dream" emerges as the album's ballad and the enigmatic "Handiclap" also proves successful. De Graff picks up the soprano sax for "Why Birds Always Sing."