By EYAL HAREUVENI
February 18, 2012
Sign in to view read count 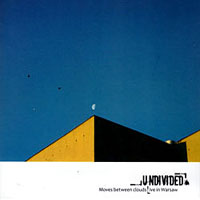 Polish composer/clarinetist Wacław Zimpel is one of the most promising musicians from the European continent. He leads the pan-European-American quintet Undivided, collaborates regularly with key musicians from the Chicago scene such as Ken Vandermark, Tim Daisy and Dave Rempis, and is a member of other local outfits.

On Univided's Moves Between Clouds: Live in Warsaw, Zimpel demonstrates a unique sonic aesthetic and musical vision. His compositions are multilayered, possess strong thematic structures and feature an expansive compositional vocabulary. Revealing great spiritual depth, the group's music is informed by free chamber jazz legacy of Jimmy Giuffre and the extended techniques and innovative harmonic approach of Eric Dolphy, as well as elements from 20th century European composers who include folk motifs in their compositions, such as Béla Bartók and Igor Stravinsky. On this sophomore recording, all three long compositions draw their inspirations from poems of American poet Laure Winter.

But the most remarkable effect is the intensity and the emotional impact and of the music, though this is a disciplined and restrained collective ensemble. Zimpel's beautiful compositions are built like dramatic suites that emphasize an inner turmoil and search for spiritual quietude. His writing covers a broad spectrum of feelings, from melancholy and fragility on "Hoping the morning say" and meditative, modest reverence on "Moves between clouds," to the peaceful joy and spiritual elation of the concluding "What a big quiet noise."

The quintet is comprised by experienced musicians. The addition of clarinetist Perry Robinson, who did not played on Undivided's debut, contrasts Zimpel playing and contribute deepness to the interplay on "Hoping the morning say." Pianist Bobby Few's light, sensitive chords are the backbone of the hypnotic title piece, and enable the music take off majestically. Drummer Klaus Kugel and bassist Mark Tokar embrace Zimpel, Robinson and Few's passionate flights on the loosely structured "What a big quiet noise."

This most beautiful live recording is a remarkable achievement.

Hoping the morning say; Moves between clouds; What a big quiet noise.