By Roger Farbey
August 6, 2019
Sign in to view read count 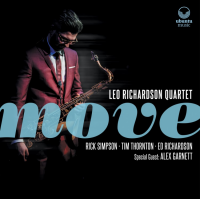 The follow-up to Leo Richardson's debut album The Chase (Ubuntu, 2018) reveals that the tenor man is no one-trick pony. These fifty minutes of hard bop further demonstrate that, in addition to being a composer of well-constructed, memorable tunes, Richardson is also rapidly emerging as one of the UK's top saxophonists.

At odds with its subtly ironic title, "The Demise" is actually a sprightly, upbeat number which instantly grabs the listener's attention; Richardson's ebullient tenor naturally takes centre stage but is energetically pursued by Rick Simpson's vibrant piano solo. The opening bars of "Effin' & Jeffin'"—deceptively similar to Miles Davis' "All Blues"—quickly dissolve into a catchy downward spiralling riff with Richardson's blowing moving up yet another notch. At eight-and-a-half minutes and the longest track on the album, there's plenty of opportunity to hear from the other three members of this virtuosic quartet, particularly drummer Ed Richardson (no relation), a paragon of rhythmic dynamism.

After its brief opening foray, "Martini Shuffle" evinces a teasingly near quote from the initial statement of Charlie Parker's "Be Bop," but the lively pace is maintained throughout this exhilarating number. The title track is primarily modal, replete with Richardson's stunning, labyrinthine tenor saxophone solo—in which he evinces some electrifying trills—seeming to channel John Coltrane. "E.F.G." is an affecting ballad around which Richardson wends his way with the assured confidence of a master.

"Mr Tim" returns the set smartly back into hard bop territory where the quartet, as at several other high points in the album, invokes tantalising comparisons to that doyen of British jazz tenor saxophone, Tubby Hayes. The set concludes with the punningly-titled "Second Wind," so-called since Richardson is joined here by fellow tenorist Alex Garnett on a rumbustious outing, bursting with haunting hooks and robust saxophone exchanges. With its strong tunes and consummate performances, the thoroughly excellent Move consolidates Richardson's position as a genuine rising star in the jazz firmament.