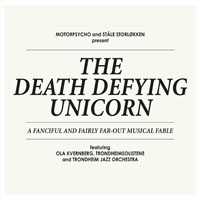 Capturing the raw power of a live performance in the studio is no small challenge. When Norway's Motorpsycho—a group that, across the past two-plus decades and over 25 recordings, has gone from metal-tinged indie rock and psychedelic space rock to flat-out progressive rock and everything in between—collaborated with Supersilent/Elephant9 keyboardist Ståle Storløkken at the 2010 Molde Jazz Festival, the result was an electrifying 100 minute show that, beyond being one of the year's best, revealed even more about the musicians who made it. Taking music that Motorpsycho bassist/lead singer Bent Sæther self-deprecatingly dismissed as having lain around without ever being fully developed, along with some jazz solo-ready vamps, Storløkken shaped it into a stunning suite for eight horn players from the larger Trondheim Jazz Orchestra collective, the eight string players of Trondheimsolistene, and guest violinist Ola Kvernberg, whose Liarbird (Jazzland, 2011) was one of the year's best releases. But could Motorpsycho and Storløkken go into the studio and document it with the same energy, the same commitment?

The answer: a resounding yes. An epic journey that tells the story of a thief who is caught and given two choices, hanging or cabin boy on a ship leaving to explore uncharted territory, The Death Defying Unicorn, subtitled "A Fanciful and Fairly Far-Out Musical Fable," is a sweeping progressive rock epic that spans two discs and 82 minutes. Where some prog concept albums are mired in their own gravitas and an excess of material in need of a good producer/editor, Storløkken and Motorpsycho have created a modern masterpiece of the genre, with nary an ounce of fat to be found. The reference points are many, with the climactic and penultimate "Mutiny!" a combination of thundering rock vocals, irregular-metered grooves suggestive of King Crimson, circa Larks Tongues in Aspic (DGM Live, 1973), but brought into the 21st century, with Sæther's bass even heavier, drummer Kenneth Kapstad playing with very un-Crim reckless abandon, guitarist Hans Magnus Ryan delivering a soaring, sustaining solo and, between Storløkken's own solo and guest keyboardist Kåre Chr. Vestrheim's mellotron and "various sonic mayhem," achieving a level of excitement that virtually bursts out of the speakers to fill the room.

As if that weren't breathtaking enough, the finale, "Into the Mystic," features a solo from Kvernberg that, unrelenting in its firepower but focused in its construction, continues to suggest the violinist as a star waiting to happen. But what makes The Death Defying Unicorn so successful is its plethora of contrasts. "Out of the Woods" opens the first disc with Kvernberg alone, until the TJO saxophones come in with a pulsating groove that turns into a controlled chaos of counterpoint from the rest of the horns and Trondheimsolistene. All too often, Storløkken is heard in free improvising contexts, but his work here suggests an even deeper musical mind, as he takes Motorpsycho's core ideas and reshapes them into a sweeping suite of recurring themes and shifting musical landscapes that range from the full power of the 22-piece ensemble to nothing more than two overdubbed acoustic guitars. "Doldrums" is a piece of contemporary classical composition that hovers ominously, while "Into the Gyre" is an electro-fused pop song, its near-The Beach Boys harmonies and the sounds of vibraphone, nylon string guitar and mellotron flutes just the beginning, as it turns heavy once again. A knotty series of guitar/violin unison lines open up to a furious middle section with some rapid-fire picking by Ryan, bolstered by Sæther's densely distorted bass and Kapstad's unrelenting pulse, with horns and strings swirling in a maelstrom of activity.

With a group that also includes a few familiar Norwegian faces—in particular trumpeter Mathias Eick and saxophonists Ketil Møster and Albatrosh's Andre Roligheten—there's plenty of firepower to elevate The Death Defying Unicorn. What ultimately makes it so stunningly successful, however, is the collaborative writing of Motorpsycho and Storløkken: one, a group which continues to surprise with each and every record; the other a musician whose full potential seems never to be fully tapped, as he reveals more and more about his inestimable talents, each and every year.

Tracks: CD1: Out of the Woods; The Hollow Lands; Through the Veil; Doldrums; Into the Gyre; Flotsam. CD2: Oh, Proteus—A Prayer; Sculls in Limbo; La Lethe; Oh Proteus—A Lament; Sharks; Mutiny!; Into the Mystic.

CD1: Out of the Woods; The Hollow Lands; Through the Veil; Doldrums; Into the Gyre; Flotsam. CD2: Oh, Proteus--A Prayer; Sculls in Limbo; La Lethe; Oh Proteus--A Lament; Sharks; Mutiny!; Into the Mystic.