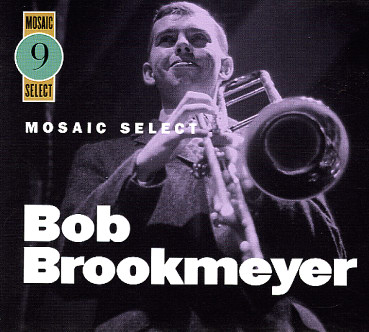 Although he continues to be a valued jazz artist recording occasionally, the state of Bob Brookmeyer's early catalog until recently was inexplicably in a state of disarray. Of course, we still haven't seen CD reissues of such vintage Verve sides like The Blues, Hot and Cold or the Mercury set Jazz Is a Kick, but things have been looking up since the appearance of this new Select reissue that brings together several choice albums including his previously hard-to-come-by United Artists dates from 1958.

This three-disc set starts with a 1954 Pacific Jazz session that was issued on a 10-inch LP called The Bob Brookmeyer Quartet and has never subsequently been reissued in full until now. Recorded superbly by Rudy Van Gelder, Brookmeyer produced this date himself and while the tunes are nothing fancy, Brookmeyer is up front in dashing form. Even at this early stage in his career, the valve trombonist comes off as a mature soloist with a rich and sonorous timbre that owes as much to the swing heroes of the day as the bebop language that was in vogue at the time.

Filling out the first disc are the half dozen tracks that find Brookmeyer in a unique line-up with guitarists Jim Hall and Jimmy Raney. Released in 1957 on Pacific Jazz as The Street Swingers, this equally rare set not only stands apart due to its unusual front line but for a strong set of originals by Hall, Raney, and Brookmeyer. Hall returns to the fold for Traditionalism Revisited , one of the trombonist's better known items and one that boasts a cool spirit due in no small part to the presence of Jimmy Giuffre. Even swing era ditties like "Jada" and "The Sheik of Araby" sound positively transformed by these forward-thinking talents.

The real meat of this set is to be found in the two 1958 sets that Brookmeyer cut for United Artists which were released and quickly disappeared, making them expensive and highly sought collector's items for many decades now. With a decided Basieish quality, Kansas City Revisited finds Brookmeyer working a small band that boasts a big sound thanks to the efforts of tenor saxophonists Al Cohn and Paul Quinichette. "Doggin' Around," "Moten Swing," and "Jumpin' at the Woodside," come directly from the Count's book but Brookmeyer manages to put something new into these adaptations. Weighing in with his own take on Big Joe Turner and other blues belters who fronted the Basie Band, Clarence "Big" Miller shouts and struts his stuff on "What's On Your Mind" and "Trav'lin' Light."

It's a similar ensemble that our leading man fronts for Stretching Out , but with the addition of Harry 'Sweets' Edison on trumpet and Basieites Freddie Green and Eddie Jones. From the standpoint of the material, this session steps away from the Basie theme, but the music is still of a swinging variety (ranging from "King Porter Stomp" to Bill Potts' "Bee Kay") and we hear more great solo work from Brookmeyer, Al Cohn, Zoot Sims, Hank Jones, and Brookmeyer himself. Tapping a segment of Brookmeyer's legacy that was all but untouched in modern times, this set is a must-have for fans of the trombonist as well as those who dig the big band sounds.