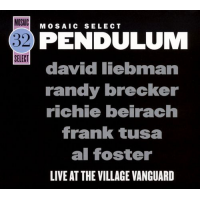 These days a collection of artists—no matter how strong—getting together for a largely standards-based date is often treated with some suspicion. With so many jazz recordings being released every month revolving around an increasingly well-heeled (but, nevertheless, still important) repertoire from The Great American Songbook or legacy jazz artists like pianist Thelonious Monk and saxophonists John Coltrane and Wayne Shorter, the cynicism that meets even forward-thinking standards interpreters like pianist Keith Jarrett's trio with bassist Gary Peacock and drummer Jack DeJohnette oftentimes carries such inherent negativity that it becomes questionable whether or not fair assessment is even possible.

But before the neoconservatism of the mid-1980s began to polarize a significant portion of the jazz community—often around one artist, the undeniably talented but outspoken and arguably reductionist Wynton Marsalis—people rarely thought that way. There was a time when musicians could cross stylistic boundaries—or dissolve them entirely—without their motives being questioned. Artists like saxophonist Dave Liebman could be seen, in the 1970s, in contexts ranging from the nascent world music-meets jazz of Lookout Farm to trumpeter Miles Davis' dense, electric jungle funk, an intimate piano/sax duo with pianist Richie Beirach...and the hard-blowing, heavy swinging post bop of his Pendulum quintet.

Anything was possible, and it was okay to demonstrate one's roots in the tradition without being immediately categorized and placed into a career-defining box. With a quintet also featuring Beirach and longtime New York friends Randy Brecker (trumpet), Frank Tusa (bass) and Al Foster (drums), Liebman went into the legendary Village Vanguard for three nights in February, 1978, exploring the post-Coltrane legacy that has since been a defining marker for his entire career, as well as the flexible post-bop of Davis' mid-1960s quintet with Shorter, pianist Herbie Hancock, bassist Ron Carter and drummer Tony Williams.

Three tracks from the date were released by the sadly short-lived Artists House label as Pendulum in 1978, and make up the first disc of Mosaic Select 32: Pendulum Live at the Village Vanguard, righting a wrong by finally making this hard-swinging, fiery blowing album available on CD. And that would have been enough. But with nearly two-and-a-half hours of additional material on two more discs, culled by Liebman from his archives and beautifully edited, remixed and mastered by Walter Quintus and Kurt Renker, Live at the Village Vanguard becomes a vivid portrait of a transitional period in Liebman's career, in between the short-lived Ellis-Liebman Band with saxophonist Pee Wee Ellis and the quintet with the young guitarist John Scofield that released Doin' It Again (Timeless, 1980) and If They Only Knew (Timeless, 1981).

It also foreshadows the similarly intentioned Quest, his quartet with Richie Beirach and a number of bassists and drummers that ultimately settled with Ron McClure and Billy Hart, that released a number of fine albums through the 1980s and reformed again in 2005 for a European tour documented on Redemption—Quest Live in Europe (Hatology, 2007).

Liebman's uniquely symbiotic relationship with Beirach was already well-established, and can be heard in numerous live contexts on the revealing Mosaic Select 12: David Liebman & Richie Beirach (Mosaic, 2004). Tusa was a charter member of Lookout Farm, Foster an electric Miles Davis co-alumnus and trumpeter Randy Brecker was, in addition to being one of the most in-demand and stylistically far-reaching trumpeters, a longtime friend. Chemistry was a given, but Beirach's distinctive blend of jazz harmonies with the classical language of more outward-thinking composers who spanned the 19th and 20th centuries—resulting in his being nicknamed "The Code"—alongside Liebman's unfettered expressionism, Brecker's unmistakable ability to blend the "in" with the "out," Tusa's unshakable support and Foster's vibrant, ears-wide-open interplay allowed the group to start in conventional places but move quickly into unexplored territory.

The classic "There Is No Greater Love" begins reverentially, with Brecker taking the familiar melody and Liebman the bridge, while Beirach introduces a hint of what's to come by diffusing the changes through some abstruse, vertically dense harmonies. But once the head's been played—and only once—and the group opens up for a lengthy solo from Brecker, all bets are off as it rapidly transforms into a still recognizable but vastly altered eighteen minutes of exciting group interplay. Brecker shifts from serpentine, bop-inflected lines to taking the smallest motif and milking it for all it's worth, all the while Beirach, Tusa and Foster creating an unshakable but ever-shifting landscape. A twenty-minute reading of Davis' "Solar" begins similarly, with Foster repeating the high hat-driven pulse before quickly moving to his ride cymbal for another potent solo from Brecker that's followed by one of Liebman's most visceral and reckless tenor solos of the set.

There are few originals amongst the eleven-song set, but Beirach's title track, which opens both the 1978 Artists House album and the Mosaic set, is an example of just how much can be done with a simple pedal point, endless harmonic imagination and a fiery rhythm section. The pianist introduces the melody, with Liebman and Brecker entering in orbital fashion, the saxophonist mirroring Beirach's theme while Brecker circles it with long-tone harmonies, leading to yet another imaginative solo that makes his somewhat secondary position to late brother Michael a mystery. With no shortage of fine trumpeters on the scene today Brecker remains a singular voice, and one whose references are less directly linked to the overriding influence of the iconic Davis.

The same can be said about Liebman and Beirach. Two players who rarely play together these days, but when they do it's as if no time has passed—they have the unique ability to transform any context into a world all their own. While there's no denying the strength of the many great rhythm section players they've worked with, including Tusa and Foster here, it's their particular ability to transport whoever they work with into a musical landscape that sounds like no other that has made this such an important, albeit sometimes mistakenly overlooked, relationship.

Two versions of Liebman's relatively relaxed "Picadilly Lilly" demonstrate how Beirach's subtle leadership drives the entire quintet. At one point on the CD1 version the pianist suddenly bursts into a rhythmic motif that drives everyone, including soloist Liebman, into a brief tension builder that quickly and, with no small sense of relief, releases into a bold swing. This is undeniably a collective, with everyone pushing and pulling, but Beirach remains a defining fundamental.

Rather looking for clever new ways to reinvent or reimagine an often-covered tune like Shorter's "Footprints," it's simply a contextualizing means to an exploratory end. Liebman, heard here on soprano—the instrument for which he's become best-known, it largely takes a second seat to tenor on this set—takes Coltrane's "sheets of sound" approach and adds space and economy to create, much like the late saxophone giant, a solo of ever-increasing intensity but, unlike Coltrane, one where tension is sometimes created as much by what's not played as by what is.

The keen perceptual acuity of the Liebman/Beirach partnership is at its best here and on the blazing closer, Coltrane's "Impressions," where Liebman dispenses with the theme so quickly it's almost invisible. Back on tenor, there's so much going on within the first minutes of his solo—whether it's Tusa's brief 16th-note pedal point, Beirach's obliquely placed block chords, Foster's perfectly placed punctuations amidst an energetic groove or Liebman's own raw screams and melodies formed from the seemingly simplest of building blocks—that it's hard to imagine the quintet keeping the fire stoked for over 22 minutes.

But keep the fire stoked they do, making it a fitting end to collection that, in its sheer, unassuming honesty, effervescent spirit of collaboration and liberated sense of adventure proves there's plenty left to say with the standards repertoire. Mosaic Select 32: Pendulum Live at the Village Vanguard may be thirty years old, but it remains one of the most exciting releases of 2008.