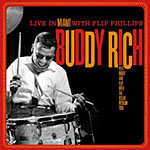 Rich's work was arguably one dimensional and these two live dates, captured for the ages from 1954 and 1957, set out a case in favor of that argument as persuasive as any. Rich, as was his vocation, is all over his drums on everything here, his extrovert nature in harness to a musical sensibility seemingly too precise to tolerate any way other than his own.

It's all there in abundance on the opening "Lover, Come Back to Me," which for all intents and purposes is taken by two bands of which Rich himself is one. Tenor saxophonist Flip Phillips was always one of the most persuasive swing-through-bop musicians, though the listener has to wait until the following "Topsy," for evidence of it as Rich manages to hold his ego in check long enough to prove he could play the part of a band drummer. When he does, the music's more worthwhile.

The same is evident on the following "Undecided," where the quartet is anything but in its approach to the title and Rich's unerring way is actually an asset. The same is true of Phillips in languorous mode, as he is a million miles from Jazz at the Philharmonic type rabble-rousing even while he throws in a few lower register honks for good measure. Pianist Ronnie Ball could be said to be under-employed, but he gets in a nice solo here, hinting at bop developments in his line.

The reading of "Jumpin' at the Woodside" lacks the ineffable grace of the Count Basie version but that should hardly come as a surprise. As it is, the rhythmically more square and orthodox phrasing of Phillips has the effect of emphasizing just how extraordinary Lester Young was.

Over half of the total program finds Rich and Phillips keeping the company of the Oscar Peterson Trio and perhaps inevitably the music reaches a level of precision which, but for the presence of Phillips and Ray Brown on bass, could be an opposite of spontaneous musical expression. As it is, the studied routines are largely avoided and Phillips gets to show off his considerable abilities as a balladeer on "I'll Never Be the Same."

Good-hearted people all over the world will be won over by the sheer joy of life that permeates "Almost Like Being in Love," with Phillips' carefree air a sign of how sweet things could become when Rich took the trouble to check his ego in at the door. The performance also emphasizes, albeit by default, that this is the Buddy Rich album for people who don't really enjoy Buddy Rich. Enough said.

Lover, Come Back to Me; Topsy; Undecided; Broadway; Jumpin