BY HRAYR ATTARIAN
December 15, 2013
Sign in to view read count 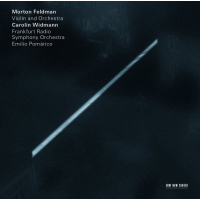 The innovative composer Morton Feldman is known for his experimental approach and his unique, signature sound that borders on the surreal. His contemplative pieces of floating sonic textures became more continuous and longer as he devoted himself to music full-time in the mid 1970's. Violin and Orchestra is one of his shorter works from the period clocking under an hour. As with most of his output, this is not a traditional concerto, where an orchestra supports a soloist. It is more of a collaboration between the individual instrument and the ensemble.

This 2013 recording, part of the ECM New Music Series, is a masterful interpretation of this difficult opus. Violinist Carolin Widmann subtly demonstrates her sublime virtuosity with her sparse notes and phrases that flow in out of the collective din like a faint streak of color within a dark, expectant backdrop.

The haunting mood is maintained by the symmetrical almost call and response type interaction between different sections of Radio Symphony Orchestra Frankfurt under conductor Emilio Pomàrico's deft direction. One of the stimulating aspects of the theme is that it simultaneously evolves but remains static. Although not jarring in its atonality there is a lack of conventional progression and the single movement never reaches a climax. It expands and contracts, coalesces and dehisces in mesmerizing patterns.

There is a primal spirituality to the way Widmann's energetic con arco refrains contrast against the percussion's dark rumble that leads to bright ringing and somber tolling of various bells. Despite an occasional flirt with melancholy the overall ambiance is that of exultant awe rather than wistfulness. Carefully placed silent pauses play a larger part near the end of the tune as Widman's soft bowing alternates with pizzicatto notes from the string section bringing the disc to a close.

Widman and Pomàrico do justice to Feldman's ingenious legacy with this exquisite rendition of his brilliantly unique oeuvre. The superb recording techniques, as is the norm with the label, heighten the savoring experience of this provocative album.