By Troy Collins
February 25, 2016
Sign in to view read count 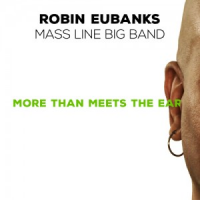 More Than Meets the Ear is Robin Eubanks' first foray leading a big band in his three decades as a performing musician. The date features compositions spanning Eubanks' entire career, artfully embellished and re-arranged for a formidable 19-piece ensemble. The key difference between this lineup and a conventional unit—other than Mike King 's bluesy organ and Boris Kozlov's intermittent use of electric bass—is the leader's occasionally electrified trombone. Eubanks has long augmented his horn with effects pedals, but this is the first time he has done so in the primarily acoustic setting of a traditional big band. The kaleidoscopic textures, timbres and tones that result from this electro-acoustic contrast are often stunning.

The stylistically eclectic but sonically cohesive program ranges from brassy swing and lush orchestrations to driving funk and sweet Philly soul (recalling Eubanks' hometown), with many pieces deftly combining elements from multiple genres. Although heavily arranged, these dynamic charts provide ample space for key soloists to demonstrate their improvisational mettle—like saxophonists Antonio Hart and Marcus Strickland, who shine in this broad context. But when Eubanks steps to the fore with his plugged-in trombone, the proceedings get downright futuristic.

There is novelty for those hearing Eubanks' efx-laden horn for the first time, but it's no gimmick; his efforts in this milieu are every bit as distinctive and personalized as the Dark Prince's seminal innovations of the early 1970s, albeit updated with newer gear. Eubanks uses a wah-wah pedal and processed loops to expand his horn's wide-ranging color palette, generating prismatic distortions that sound far more electronic than acoustic in nature. In addition to a bold opening gambit that introduces the punchy title track, his amplified extrapolations on "Metronome" are exemplary—textbook examples of his forward-thinking creativity, bolstered by modern technology.

King contributes indigo-hued organ washes to the soulful "Bill and Vera," and the late Lew Soloff delivers heroic statements on the dramatic closer "Cross Currents," but by and large, despite his magnanimous leadership, this is largely Eubanks' show. With its career-spanning set list and ambitious arrangements, More Than Meets the Ear serves as a perfect introduction to Eubanks' oeuvre for those unfamiliar with his discography, while enabling dedicated aficionados a chance to hear his most enduring tunes on a scale befitting their compositional complexity.