By Tyran Grillo
February 26, 2016
Sign in to view read count 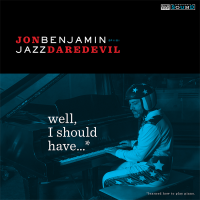 "Jazz is the ocean... I am just one wave forming one curl, crashing once onto some remote beach somewhere in time. And that wave makes a small imperceptible change in the slope of the sand, upon which at some point in time a baby turtle will walk across, leaving his trail for just an instant, before the tide washes it clean. That's a pretty cool analogy. More to the point, I do not play piano and I made this jazz album."

These words from Jon Benjamin say at once so much and so little about what's happening on his baffling record, Well I should have..., showing on the one hand his penchant for humorous contradictions, while on the other neglecting to take the implications of those contradictions seriously. That the punchline of the album's title is "learned to play the piano" will come as no surprise to anyone who tolerates his take on—or is it a leaving of?—"It Had to Be You," in which his fingers dance uncertainly about the evergreen. In fraying the edges of an otherwise crisp rendering thereof by saxophonist Scott Kreitzer, Benjamin kills the beauty of the thing almost before he touches the ivory. Not only is it clear Benjamin has never played the piano, but also that he has never really listened to jazz. And so, if his playing sounds like mockery, it cannot be toward a tradition he doesn't understand but only toward himself for sullying it with fleeting, sophomoric interest.

By sitting at an instrument he has no business being in front of, the comedian and voice actor, known for his roles on such cultish animated series as Bob's Burgers and Archer, joins veterans David Finck on bass, Jonathon Peretz on drums, and the above-mentioned Kreitzer on sax, all three of whom are far braver for stepping into the studio with Benjamin than he with them. One can only feel for the bona fide jazzmen, who apparently walked into this project unknowing of its conceit. All the more appropriate that Benjamin should also have appeared on Dr. Katz, because after listening to this album you might just need a therapy session to get it out of your system.

Then again, it's only fair to assert: this isn't a jazz album, per se, but a comedy album, as made painfully clear by the spoken-word bits that frame it and, just barely, hold it up in the middle. "Deal With the Devil" finds Benjamin meeting with the Red Man himself to sell his soul, so that he might attain the mastery required to pull off making the record he so naively envisions. Yet even the devil assures him that selling one's soul for such a purpose should be a last resort rather than a first step. A cautionary tale, perhaps, but one that fails to follow through, for rather than selling his soul, Benjamin has robbed the music of its own. The concluding "Amy's Song (The Bum Steer)," a crude rap missive about anal intercourse, is all you need to know about where the set list is ultimately heading.

But the album's center—a four-part suite, if you will, entitled "I Can't Play Piano" and built on what he admitted in an NPR interview as his "real untapped un-talent"—is probably the main reason why you've stuck with my review this far, so let's get to the music. One thing is obvious: Benjamin has got a standup band at his disposal. The rhythm section of Finck and Peretz is in the pocket from the start of Part 1 and sells the feeling of a legit jazz recording, which Benjamin can only veneer with his posturing. His pianism is amusing and erratic, amounting to little more than dribbling without ever making a basket. One certainly can't deny a certain energy and feel for rhythm, but the timing gets lost in the chasm of his indulgence. There's something astonishingly surreal about it all, as if this album shouldn't exist in a world such as ours. But it does, and its confrontational stance is, if anything, something to regard.

In Part 2 the band swings with panache, even as Benjamin stumbles, trips, and falls face-first into a steaming pile of failure. Single notes fare better than the random block chords, which come across as full-fisted bleats (Yoko Ono did it far better). What's fascinating to notice here is how self-conscious Benjamin suddenly becomes. It's right there in his solos, which now feel more like padding than filler. He avoids the center as if in fear of what might come of it, trading his abandon for trepidation. One can actually feel him realizing just how deeply he is out of his league. Maybe this is why, in the Latin-flavored Part 4, he hogs so much of the back seat and makes actual attempts at harmony, even if any flickers of hope are quickly snuffed as he throws open the window to take in the full view of his avowed un-talent. Finck and Kreitzer take this opportunity to grab some much-deserved spotlight, both sounding as if they were playing in a different studio altogether. They might as well be.

But it's in Part 3 where the implications of Benjamin's precarious enterprise become too difficult to ignore. In it, he hardly echoes the thematic setup from Kreitzer, who draws Peretz into some tight drumming, Benjamin struggling all the while against the tide of experience to say anything worth hearing. What separates him, then, from the professionals is that he doesn't translate any of his surrounding impulses into a personal language. Instead, his individuality is confined to utterances that die the moment he produces them. On this track, he engages Kreitzer in the only exchange that elicited laughter from me, as he hurls bon mots like "Take this!" or "You can do better!" at the saxophonist, whose competency is already beyond proven. It was at this point in my listening that whatever amusement might have been rattling in my head turned into sober reflection, for only then did it occur to me what Benjamin was failing to embrace: collaboration, without which jazz is nothing. I imagine you will find yourself, assuming you can sit through the entire album, feeling so rejuvenated whenever Benjamin cuts out to let the core trio take the helm that your appreciation for the level of skill that goes into this beloved art form will be heightened. One need hardly listen to Well I should have... to get this effect, but it's the only conclusion I can safely reach within its confines.

The stakes are so low here that it's hardly worth criticizing Benjamin's motivations as a satirist. There are plenty of thoughtful jazz parodies out there. Take Whiplash, for instance—which, though brilliant, is anything but a film about music. If something positive can be construed from this, it's that, in his beguiling way, Benjamin has, by doing so little, affirmed all that is good and true in jazz from those who do so much. His inability to hear what his bandmates are doing, lack of collaborative impulse, and nonexistent investment in the genre show just how committedly the accomplished musician must embody those very things...and so much more.