By EYAL HAREUVENI
September 16, 2014
Sign in to view read count 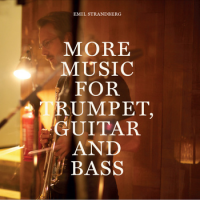 Swedish trumpeter Emil Strandberg continues to explore the format of an intimate, acoustic trio. He began in 2012 with a self-titled trio of double bassist Pär-Ola Landin and drummer Sebastian Voegler (Self Produced, 2012) that covered standards, continued in 2013 with pianist Sten Sandell and double bassist Patric Thorman in It Is Night and I am Lost (found You Recordings, 2013), a set of free improvisations, and again in the same year with a Ola-Landin and guitarist David Stackenäs in Works (Found you Recordings, 2013), that featured his own compositions. Now he solidifies his interplay with the the same trio in More music for trumpet, guitar and bass.

The approach remains the same—music is created through subtle, sensitive negotiation between the musicians, searching for the space between their instruments. Out of careful listening, the composed arguments become clear and playfulness, drama and beauty are formed.

Strandberg has a gentle, warm tone and he explores the timbre of the trumpet in a modest and reserved manner, supported by wise, minimal touches of Ola-Landin and Stackenäs that strengthen the melodic motifs and the harmonic structure. The original pieces radiate a delicate melancholy and thoughtful humor, articulated with an impressive elegance and beauty, often associated with the Nordic school of ECM. Stackenäs even sounds (on "Audible forms") as if influenced by guitarist Ralph Towner's solo albums from the ECM seventies catalog. The short "We're the après-garde" highlights the clever, mischievous humor of the trio. Even the concise, upbeat cover of Paul Desmond's "Wintersong" and the contemplative cover of the Thelonious Monk standard "Ugly Beauty" stress the intimate and patient interplay.

Music is a rare beauty, even in such naked, elegant format.

Avant-propos; Wintersong; Nothing will come for my soul; Konish; Ugly beauty; Audible forms; Away, away; No, we’ll stay; We're the après​-​ garde; Everything drifts; Love emerges, and it disappears.