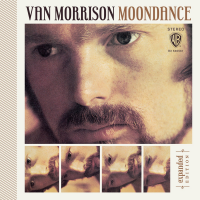 Described as classic by the artist himself, Van Morrison's Moondance is one of those albums that is nothing but a sublime pleasure to rediscover it via the expanded edition. In its remastered version, the polished perfection of the original ten collection of tracks heightens a delicate density that's further illuminated by hearing the outtakes, alternate versions and rehearsal sessions from which the beloved album was condensed.

The relative simplicity of the material and its arrangement may be the first of multiple epiphanies arising from a hearing of this 1970 album revisited. The prominence of acoustic guitar and piano on cuts such as "And It Stoned Me" and "Caravan" suggest a direct link to Morrison's previous recording, the much- revered Astral Weeks (Warner Bros. 1968), while the punchy horn charts on the latter are a direct reflection of the emotive r&b/soul undercurrent in most of this material.

"Into the Mystic" hearkens to the otherworldly atmosphere of the aforementioned masterwork, and may be no less enrapturing based on the hypnotic bass line, the subtle touches of percussion and, most of all, and the depth of emotion within Van Morrison's voice and vocal style. It's the latter, in fact, that, notwithstanding the straightforward language of its lyrics, renders "Crazy Love" almost intoxicating in its litany of beauty within the singer's object of affection.

There's a playful quality even in the finished take of "Come Running" that's indicative of the panoply of feelings within the official version of Moondance, no doubt the source of its longstanding attraction. Though met with critical acclamation, it was not exactly a blockbuster in commercial terms, so, taken from a half-dozen dates, the near-hour long session culls "I Shall Sing" unreleased, and "I've Been Working" to appear on the next album His Band and The Street Choir (Warner Bros., 1970) released later in this same year. This further depicts the distillation process that forged the jewel of an album as it's commonly known.

Yet the more extended versions of, for instance, "Caravan," constitute harbingers of the more improvisational means by which 'The Belfast Cowboy' would perform these songs in the immediate future, then further into his extended career. The harmonica that appears ever so briefly on the finished take of "These Dreams of You," represents a bluesy element reaffirmed by saxophonist Jack Schroer's economical solo, both notable for its source, "Nobody Knows When You're Down and Out," as is the detail of numerous takes of the title song (this is the twenty-second)in comparison to the other numbers.

Van Morrison has decried the reissue of Moondance as enacted without his consent and such relative bitterness rears its ugly head in some of its beautiful songs, albeit only in passing. "Brand New Day" evinces an adamant refusal to engage in nostalgia, the depth of which betrayal-"used, abused and so confused..." wouldn't ring so true if it didn't also give way to the fundamental optimism and relish of the moment that Moondance represents in its familiar form and which this set only magnifies.

CD 1 Remaster: And It Stoned Me; Moondance; Crazy Love; Caravan; Into The Mystic; Come Running; These Dreams Of You; Brand New Day; Everyone; Glad Tidings. CD 2 Sessions, Alternates & Outtakes: Caravan (Take 4); Nobody Knows You When You’re Down And Out (Outtake); Into The Mystic (Take 11); Brand New Day (Take 3); Glad Tidings (Alt. Version); Come Running(Take 2); Crazy Love (Mono Mix); These Dreams Of You (Alt. Version); Moondance (Take 22); I Shall Sing (Take 7); I’ve Been Working (Early Version, Take 5).