By DAN MCCLENAGHAN
September 12, 2020
Sign in to view read count 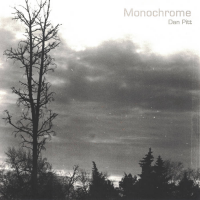 Toronto-based guitarist Dan Pitt debuted as a recording artist in 2019 with his trio outing, Fundamentally Flawed (2019). A versatile gutarist who plays in a variety of styles, he has performed with cellist Andrew Downing, saxophonists Tim Berne and Michael Attias, and bassist Michael Formanek.

Monochrome, Pitt's offering for 2020, is a solo guitar work, subtly and deftly augmented by pedal effects, loops and sampler phrases. Pitt explores his inner musician on this thirty-eight minutes of (mostly) meditative sound, beginning with "Ghosts," a luminescent, textured tune that brings to mind Bill Frisell's and Pat Metheny's ruminative alone-with-the-guitar outings. The metallic sustain and the lonely atmospherics of the opener give way to "Attraction," a crunchy, energetic, Link Ray-esque rumble of a tune.

The set is all originals from Pitt's pen, including the brief, acoustic "The Sorrow," and "Ditto," working a spacious tension/release mood, and "Which Way Is Up?" that could serve as a soundtrack to a lonely walk as night settles in and colors fade to shades of grey as the stars begin to appear.

"Benched" has a gregarious Latin tinge, and "BroOke" has an electro-orchestral, almost radioactive feel, while "Lester Sleeps In" sits in the closing tune/highlight-of-the-album position, with its beautiful, subdued melody and a serenade of (pedal effects?) crickets.

Dan Pitt has given us a very good trio outing and now a compelling solo set. Could a larger ensemble outing be in the works?