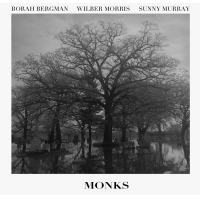 For free jazz aficionados, it is much like unearthing a hitherto unknown archaeological treasure. For ordinary listeners, dulled by all the Monk retreads, there has been little to prepare them for the startling reinvention on Monks by pianist Borah Bergman, bassist Wilber Morris and drummer Sunny Murray. It has taken a while to surface. After the 1996 recording session, the tapes were found to be unusable with overload, but when producer Joe Chonto came across back-up cassettes in late 2018, to his amazement they sounded fine. Much technical wizardry has gone into restoring the session in high quality sound.

Bergman, who died in 2012, was an astonishingly gifted pianist, who through intense practice had become near ambidextrous to the extent that he could improvise spontaneous free counterpoint with either hand at unconscionable speed. So much so that it often sounds as if there are two accomplished pianists on the date. But he also had enough ideas to mean that technical fluency was never just an end in itself. Even so it sometimes seems as if he has no filter, as when a quote of "In An English Country Garden" crops up in the middle of "Thelonious."

As all three principals have now passed, Chonto has chosen to take an all inclusive approach to documenting this session, by including studio chatter, a false start and alternate takes, alongside the blistering discourse. Indeed the two CDs present three absolute masters at work. Monk serves as the launch pad for Bergman's full on explosive style. But even on his most elliptical excursions the theme still exerts a gravitational pull upon the hammered notes and insistent clusters, all conveyed courtesy of that phenomenonal technique.

Murray, one of the pioneering drummers of the 60s avant-garde, accompanies with broad brush strokes, conjuring waves of sound. While Bergman articulates the notes, Murray washes them together. Having worked separately with both Bergman and Murray, Morris acts as the connective tissue which keeps the first-time meeting between the two giants on course. Outstanding on the ballads, he later excels in contrapuntal savvy, offsetting and embroidering Bergman's rhythmic figures.

For the first three tracks, it seems as if Bergman and Murray see each other as a challenge, constantly egging each other on in ferocity, while Morris gets somewhat lost within the mix. After all the tumult, the quality goes up yet further on "Light Blue," a beautiful, focussed rendition on which Murray dials back to allow more transparency for Morris' warm yet burly melodicism to shine through. After a false start "'Round Midnight" is another highlight, tender at first but gradually increasing in complexity.

As the title suggests, the lengthy "A Free Association Peregrination In The Fecund And Funky Fields Of Monkdom" heralds a wild and woolly colloquy with various tunes implied by the Monkish intervals. It's stunning! Like a rich dessert, the session is perhaps best sampled in small portions to avoid calorific excess, but it is irresistible nonetheless.