By George Kanzler
January 6, 2009
Sign in to view read count 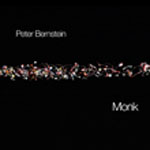 How and by whom a piece of music is presented profoundly influences how it's heard. This would seem to be a truism, but it is one often contradicted. Case in point: a band begins playing a Duke Ellington standard and there's recognition and approval from the audience, the "I like Duke" effect. When this happens with a singer beginning "Satin Doll" the irony is lost. Ellington disliked those Johnny Mercer lyrics so much he rarely presented a vocal version of the piece himself. Which bring us to Thelonious Monk.

He never employed or recorded with a guitarist (save early bootlegged jam sessions with Charlie Christian and a big band with Howard Roberts) and his piano playing and arranging can hardly be called guitar-like. Hearing guitar play Monk's music is like hearing an orchestral version of a Wagner opera aria; it reveals a wholly different aspect of the music. While Monk's own versions put emphasis on the disjointed angularity and idiosyncrasies of the music, guitar interpretations bring out their lyrical, melodious side. Howard Alden is good at this, but until this CD, the only other guitarist with a knack for bringing out that side of Monk who devoted a whole album to it was Joshua Breakstone. Peter Bernstein's trio approach can be encapsulated in the title of the opening track: "Let's Cool One."

Like Ben Riley's Monk Legacy Band, which also employs a guitar (and no piano), this trio brings out the strong melodicism inherent in Monk's music. And Bernstein is a graceful guitarist who polishes the rough pianistic edges Monk gouged into his tunes, as can be heard on his solo version of "Monk's Mood." The trio pieces remain largely true to the tempos, an important part of Monk's conception, but bassist Doug Weiss and especially drummer Bill Stewart rile up the surface just enough to save these interpretations from being obsequiously polite.