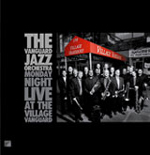 "The Vanguard Jazz Orchestra holds sway Monday nights"—so says the Village Vanguard's minuscule listing in the "Goings On About Town" section of The New Yorker magazine. Other acts come and go, but the VJO—the hellacious big band once co-captained by Thad Jones and Mel Lewis—just keeps on keeping on. Monday Night Live at the Village Vanguard amply demonstrates why "holds sway" is an excellent description of the orchestra's remarkable ability to mesmerize an audience.

Plenty of big bands come out blazing, pasting listeners against the wall with a demonstration of the band in full song—the "Shock and Awe" doctrine set to music—but the VJO are way beyond that. "Mean What You Say" starts out as a swinging trio, with Michael Weiss ably leading the rhythm section through the piece's finger-popping opening section. Not only does this let everyone settle in—audience and band members alike—but when the full band finally takes a chorus, the power and drama are both twice the size they would have been if the tune had been a band blast from the start.

The charts are as tight as the Holland Tunnel at rush hour, and they are executed with a precision worthy of the Diamond District. Considering the wealth of talent on the bandstand, that is hardly a revelation: Terell Stafford—the M.V.P. of Bennie Wallace's big-band Coleman Hawkins tribute Disorder at the Border (Enja, 2007)—makes some serious waves on Jones' "Say It Softly" and Fats Waller's "Willow Tree"; Gary Smulyan shows his lyrical side on the vibrant take on "Body and Soul," and then he peels paint on the burning "Little Rascal on a Rock"; Ralph LaLama stokes the spirit of the gospel-fueled "Mornin' Reverend"; and while Dick Oatts' phenomenal reedwork is prominent in both sets, it's his whimsical piccolo on the salsa-fied "Don't You Worry 'Bout a Thing" that is the best example of the VJO's brilliant attention to detail and nuance.

Most of the music comes from Jones' prolific pen, and some of the material stretches far back into the Jones/Lewis era. Regular VJO pianist Jim McNeely wrote "Las Cucarachas Entran" (loosely translated, "Roaches Check In") back in 1982, and Bob Brookmeyer's arrangements of "Willow Tree" and "St. Louis Blues" also come from back in the day. The latter tune features off-kilter, "run-down" harmonies that are reminders that the Jazz Age covered a good chunk of the Depression. Scott Wendholt's throaty growls and Luis Bonilla's muted howls develop the sepia-toned picture even further.

Spreading the music over two discs was an outstanding call. Not only does this avoid any messy decision process on what to leave out, but it also gives the listener a good idea of what two sets at the Vanguard might sound like. Monday Night Live is a dazzling representation of the VJO's innumerable talents. More than that, though, it encourages the listener to come check out the real thing, even if it means being out late on a school night.

CD1: Mean What You Say; Say It Softly; St. Louis Blues; Body and Soul; Mornin' Reverend. CD2: Las Cucarachas Entran; Willow Tree; Don't You Worry 'Bout a Thing; Kids Are Pretty People; The Waltz You Swang For Me; Little Rascal on a Rock.