Maximize your visibility at All About Jazz by upgrading your musician page from standard to premium. With it, you'll receive All About Jazz home page exposure, a highly stylized / ad-free musician page with bonus features and benefits, an ad, plus you control where you sell your music and so much more.
Learn More
213

Gale Garnett And The Gentle Reign: An Audience With The King Of Wands & Sausalito Heliport 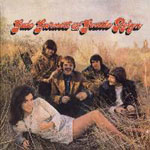 Say what you like about the 1960s, but it would be no easy task trying to identify another decade of the late twentieth century when music as singular as this would have made its way onto record. On the surface, this is music typical of the era. It's only with repeated listening that its singularity emerges, with influences from all quarters and then some merging into a brew that's both heady and a little unsettling.

Gale Garnett has a resonant, chestnut brown voice that belies her winsome appearance on the cover, and she applies it to a range of material that might have tested the interpretative power of a more accomplished, "correct" singer. That in itself contributes in no small part to the appeal of "Ballad For F. Scott Fitzgerald" where, over an accompaniment of guitar and strings, she hints at the unlikely amalgam of Bobbie Gentry and Julie London.

Such pigeonholing as that might imply has no place here, however, especially when the nuanced "Word Of Advice" makes a political point in something other than the naive counter-cultural norm of the day. The Gentle Reign comes into its own on this one with its mixture of folk and beat group stylings.

The unassuming air of "You Could Have Been Anyone" is subverted from within by the lyrical content and Garnett's reading of it. The song's success is due in no small part to its unusual structure, but that of itself is only a measure of how far this was a band for which self-containment seems to have been some kind of watchword.

By the time of "Sausalito Heliport," both singer and band have moved on. Opening as it does with "Freddy Mahoney" the album is rather more caught up with worldly concerns than its predecessor. The subject of the title forfeits his position as a junior executive in plumbing supplies to join a rock group and grow his hair, though not necessarily in that order. Handled with a particular attitude, the theme doesn't come across as hackneyed and that's an achievement in itself.

"Deer In The City" is something else, however, evocative of a world where all the black silk socks are singing and conformity is corrosion of the mind. Whilst the latter is a hackneyed theme, to be sure, here the treatment of it is anything but, with an arrangement bordering on the baroque rendering the song a kind of one act drama.

Existing as this coupling does now as both of its time and outside it, the age turns a spotlight upon it which reveals only a singular work for which comparison does little.