By Troy Collins
November 7, 2006
Sign in to view read count 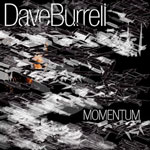 For the first time in almost thirty years, pianist Dave Burrell returned to the studio to record as a leader with William Parker and Andrew Cyrille on 2004's Expansion (High Two). Momentum features Burrell recording for the first time with bassist Michael Formanek and drummer Guillermo E. Brown, continuing to explore the classic piano trio format. With this new blood, Burrell hones in on the jazz tradition with intensity and focus, delivering one of the finest statements of his career.

Burrell explores a variety of moods from introspective to assertive on six new compositions, half of which ("Downfall," "4:30 to Atlanta," "Broken Promise") were composed to accompany Oscar Micheaux's 1925 silent film, Body and Soul, and a sublime new arrangement of "Coup d'Etat." Many of Burrell's recent pieces are inspired by the current tempestuous political climate, providing the session with an undercurrent of bluesy melancholy and dramatic tension.

Burrell is in fantastic form, his playing assured and resolute, his focus and commitment to the tunes palpable. He launches splintery fragments over the lumbering, deconstructed funk groove of "Downfall" with impetuous nerve. Conversely, his tender, regal touch on "Fade to Black" is delivered with conviction and restraint, almost neo-classical in its austerity and grace.

The title track finds him boisterous and exploratory, expelling cascades of fleeting notes and crushing block chords as Formanek and Brown accent his labyrinthine excursions. The closing cut, "Coup d'Etat," reprised from Expansion, swings leisurely at first, and then shifts tempos as Burrell casually navigates the changes.

Perfectly suited to Burrell's open-ended aesthetic, Formanek and Brown accompany him with elastic timing and a malleable compromise between structure and freedom. Modulating with endless variation through individual song forms, they maintain edgy forward momentum without losing track of the individual tunes' framework.

Burrell is a magnanimous leader, allowing his able-bodied sidemen equal time in the spotlight. Formanek delivers a striking bowed bass solo on the opening of "Fade to Black" and plucks sultry, lyrical statements throughout "Cool Reception." Brown introduces "4:30 to Atlanta" with a roiling and turbulent drum solo, subtly accompanied by Burrell's muted chords and Formanek's slippery bass work.

Momentum is a mature and haunting album from an acknowledged master—and a definitive statement from an underappreciated legend.