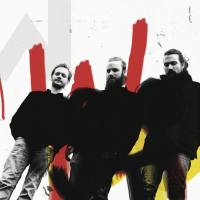 Three Norwegian musicians unite as Momentum to explore the junction of minimalism and improv. Forming the sides of an equilateral triangle are reedman Jørgen Mathisen (who can be heard with bassist Per Zanussi's 5 and power trio Krokofant), bassist Christian Meaas Svendsen (part of drummer Paal Nilssen-Love's Large Unit) and drummer Andreas Wildhagen (heard to excellent effect with Jonas Cambien's Trio on A Zoology Of The Future (Clean Feed, 2016)). Although essentially a free jazz trio, the threesome still carves out their own niche and manages to forge new directions, with varying degrees of success, while at the same time taking care of business.

Mathisen largely avoids conventional notes and his overblown reverberations bring English saxophonist John Butcher to mind. Svendsen's frequent sorties into the upper register give the date a distinctive flavor, and he proves particularly adroit with bow in hand when he introduces a vocalized quality. On drums Wildhagen deploys an inventive mix of rhythm and timbre with a characteristic dry tumbling clatter.

The program comprises two conceptual pieces credited to Svendsen and a further two collective concoctions whose focus still suggests a shared ethos. On the intriguing "Gaining" the combination of portentous booming bass and carefully controlled saxophone squalling creates a series of strange indeterminate sounds evoking the stirrings of some nameless monster. By the end Mathisen's tenor alternates between falsetto cries and juddering overtones within a unhurried ponderous gait, embellished with cymbal strikes and bowed scrapes.

"Maintaining" is similarly tightly drawn. Tandem bass and saxophone hit on a rhythmic but barely changing tone, with rumbling percussion in the same cadence. While the track gradually evolves, it hews close to the initial gambit and does not capture the imagination in quite the same way. No such problem with the titular "Momentum," which starts in a swirl of post Ayler saxophone, shrieking sawing and machine gun tattoo. Impetus comes only when Svendsen switches to resonant pizzicato launching Mathisen's tenor into the stratosphere. A reversion to arco leads to cooling ardor and a gradual slow boil textural rattle with tenor lines shot through with lyricism.

On "Snake Ballad" Mathisen's soprano saxophone harmonics merge into a liquid yodeling, loosely shepherded by conversational bass and drums. Again it's a novel formulation which sets the triumvirate apart from the norm, and marks Momentum out as an outfit to watch.