By Roger Farbey
September 19, 2017
Sign in to view read count 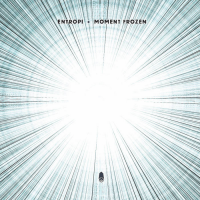 Whilst studying for her Masters at London's Trinity Laban Music Conservatoire of Music and Dance, altoist and composer Dee Byrne met her co-frontliner, trumpeter André Cannière where he's a visiting jazz tutor. Moment Frozen is the follow- up to Entropi's debut album New Era, released in June 2015 on the F-IRE Presents label.

The collective improvisational opening to "Stelliferous Era," used as a tension-building device, rapidly gives way to a release with a piano and bass driven theme, intermittently and dramatically punctuated by a second statement from the horns. Following engaging solos from Cannière and Byrne, the piece neatly resolves with a repeat of the opening sections. From the almost ballad- like opening of "Fish Whisperer," Byrne's incendiary alto playing bursts out in the form of a rumbustious solo before the number gently closes.

The catchy staccato opening of "Interloper" gives way to frenzied collective improvisation which resolves by way of a satisfying ensemble obligato riff. The title track is dominated by Rebecca Nash's swirling piano underpinned by elegant unison horns and Matt Fisher's thunderous drums. It's a hauntingly affecting composition and an obvious choice as the album's showpiece. Whilst in the midst of even the most turbulent sections of tracks like "In The Cold Light Of Day," there is always an underlying understanding that the music will return to the trademark lyricism that defines this group.

"Elst Pizarro" benefits from an elegant trumpet solo from Cannière. Firmly anchored by Ollie Brice's resonant double bass, the closer, "Leap Of Faith" is characterised by a pervasive languidness but still captures the listener's attention. The horns playing in unison here are particularly reminiscent of Miles Davis's second quintet with Wayne Shorter. Recorded live in Gloucestershire during September 2016, Byrne's second album possesses both maturity and complexity but crucially it's imbued with its own cohesive energy.