By JOHN KELMAN
February 6, 2008
Sign in to view read count 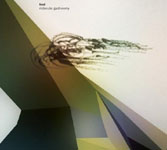 Losing a key member of a quartet can be challenging; losing two can be disastrous. There's no doubt that the departure of bassist Mats Eilertsen and trumpeter Arve Henrkisen from Anglo/Norwegian improvising collective, Food, has mandated significant change since its final effort as a quartet, Last Supper (Rune Grammofon, 2004). Based on their performance at Punkt '06 in Norway, however, British woodwind multi-instrumentalist Iain Ballamy and Norwegian percussionist Thomas Stronen have more than enough to continue on, a fact made clearer still on Molecular Gastronomy, Food's first release as a duo.

Ballamy and Stronen are joined by Maria Kannegaard (Fender Rhodes) on half of the album's ten tracks, and Ashley Slater (effects, keyboards) on three others; but while the textural contributions of Food's guests can't be understated, what has turned Food the intrepid quartet into Food the equally fearless duo, has been Stronen's ongoing assimilation of electronics into his arsenal of drums and sundry percussion instruments. The group has evolved, over its ten-year existence, from being a largely acoustic improvising ensemble to one where electronics, including live sampling, is a defining characteristic.

There are times when Ballamy—here leaving the electronics to Stronen—lays out entirely, with the amount of sound Stronen produces on his own being nothing short of remarkable. Far more than a percussionist, Stronen contributes melody and harmony to the mix to sculpt all-encompassing soundscapes. The fact that he does this completely on the fly is even more extraordinary but, like many of his fellow Norwegians exploring the seamless integration of technology and acoustic instruments, this has been an ongoing evolution, equally evidenced in his Humcrush (Rune Grammofon, 2004) duo with keyboardist Stale Storlokken.

If Last Supper was Food's most approachable album to date, Molecular Gastronomy is more accessible still. That's not to suggest that Food has become less adventurous, and there are plenty of industrial and otherworldly textures to be found. But amidst Stronen's percolating electronic rhythms on "Apparatus," Ballamy's soprano sax is positively lyrical, evoking Middle Eastern images before moving into more exploratory territory. "Khymos" is nearly ambient, with Stronen sampling Ballamy's introductory solo, processing it and feeding it back to create a spare musical landscape where the simplest of ideas is more than enough fodder for the imagination.

Electronics, and Slater's keyboards and effects drive "Red Algae" but so do Ballamy's ascetic lines and Stronen's acoustic kit work. On "Iota" and "The Larder Chef"—the disc's only tracks to feature Food without guests—Stronen takes Ballamy's spare, gradually evolving alto flute lines and sonically expands them into a sumptuous and enthralling auralscape.

Harmonic stasis may be the norm, but Food and its guests use sound sculpting, space and deceptively simple melodies to build music that may not have conventional form, but is never without purpose. Last Supper may have been Food the quartet's swan song, but the captivating Molecular Gastronomy makes it clear that its innovations are being carried forward without pause by its two remaining members.

Visit Iain Ballamy and Thomas Stronen on the web.