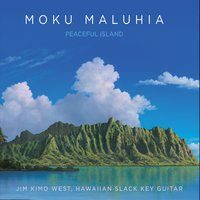 In addition to his regular gig as guitarist with musical parodist Weird Al Yankovic—which requires him to cover a wide variety of guitar styles—Kimo West is a Hawaiian slack-key guitar aficionado. His previous solo recording Guitar Stories (Westernmost Records, 2016) applied the finger-style playing technique with open tunings to an eclectic variety of material, accompanied by several supporting musicians. Here he stays closer to the slack-key tradition, playing solo with occasional support from shakuhachi flute and cello. Kimo's compositions are consistently lyrical and beautiful without being cloyingly "pretty."

The set achieves variety in several ways, by the different tunings employed (listed in the album notes), by the use of baritone guitar as well as regular guitar, by occasionally overdubbing a second guitar, and by contributions from guest musicians."Tide Pools" opens the album with a beautiful evocation of Hawaii's tide pools (in Drop C tuning). The title tune employs two baritone acoustic guitars (in the traditional Taro Patch tuning), evoking the calm feeling of the Hawaiian islands, surrounded by more water than any other place on Earth.

"My Old Island Home" features the first guest appearance, cellist Simone Vitucci, who also appeared on Guitar Stories. On this track West largely acts as an accompanist, but on "The Gentle Rain of Koali" the cello does not enter until about halfway in, and the two instruments engage in more of a duet. "Bamboo Forest" features the bamboo shakuhachi flute of George Abe—appropriate to the title—and West plays a minimal accompanist role. Kimo's compositional approach is shown on "Hanalel River," a solo piece with several dramatic pauses. The closer "Mele Menehune -Acoustic Remix" revisits a piece from Guitar Stories. This arrangement, using a baritone guitar and a standard guitar, produces a big sound distinct from the rest of the tracks. In some ways he saved the best for last!