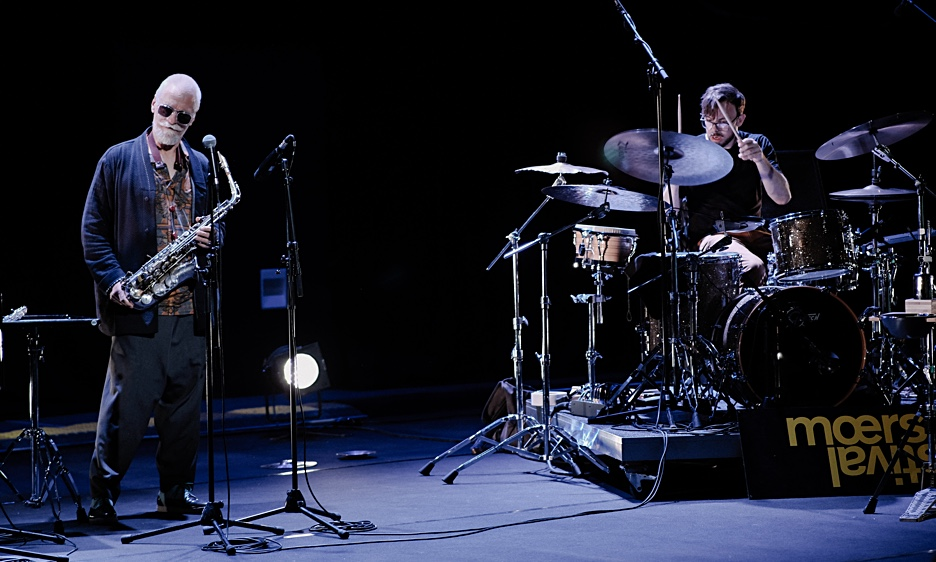 By PHILLIP WOOLEVER
May 20, 2021
Sign in to view read count
Germany's Moers Festival has a long-standing reputation for expanding the boundaries of top-quality musical formats. Performance scope and content is always unique, but last year's 2020 edition provided even more noteworthy distinction than usual. That truly exceptional pandemic production featured typically abundant instrumental, vocal and electronics highlights but more important, even at a greatly reduced scale, the live scene at Moers offered a bright ray of hope at a time Covid-19 was upending life as we knew it.

That the festival took place at all (with multiple artists and a small gathering of technicians and media in attendance) was a milestone during those relatively early days of the new virus awareness and adjustment. Amidst a barren international landscape of cancelled concerts and quarantined nations, the continual sonic scale of live music was likely unequalled anywhere.

A glimpse of how much streaming musical events might impact or alter the future of concerts was modified through how Moers and its broadcast partners established their socially distanced studio. Global disappointment from cancelled events due to the pandemic has continued indefinitely, but it was still a very optimistic moment in May 2020 when Artistic Director Tim Isfort announced that the festival would proceed during the originally scheduled dates, though obviously diminished from the initial program, and would include a live audience.

This was a crucial, optimistic direction for Moers to take at a time when just about every other major festival on the calendar that time of year had already cancelled in response to rapidly rising infections. Such decisions obviously involve serious health and financial related implications, and remain controversial. One of the only certainties was that Moers would present an inspired mix of musicians and supporting visual concepts. The festival has changed from it's initial jazz-based structure, but there was still an abundance of jazz-related acts. Since the four day broadcast was enhanced by conceptual art and abstract narration, last year's gala was centered on video properties and technology.

Thus, green screen story lines and eclectic video images were often as prominent as the music. A Warhol-like mascot character deemed Miss Unimoers spent far more time performing than any other participant, except perhaps the young woman who interviewed acts and moderated online exchanges in an art deco set behind the alternating stages on each side of the temporary studio.

While the festival's basic structure looked the same and remained similar to previous years, the absence of communal energy was apparent to attendees. There were never more than seventy people (in total and including larger bands), to be seen in the same broad space. The only people not constantly in masks were the musicians and a few volunteers during occasional, isolated smoke breaks behind the hall.

Despite an air of caution and restrictions, there was a very positive buzz and strong sense of shared purpose as the festival kicked off. A restrained but palpable excitement surrounded the pavilion and adjacent complex. One early realization was that it's no fun wearing a mask but you do learn to identify when someone is smiling beneath theirs. The first band to appear was PoiL, a rocking space metal trio (Antoine Amera on keys, Boris Cassone on bass, Guilhem Meier on drums ) from Lyon, France who mixed driving instrumentals and keyboard pyrotechnics with slick shifts into vocal harmonies. The band was energetically animated and loud as the proverbial fuck. After months of relative silence along the current concert front, such cacophony-like bombast was exhilarating as the small audience nodded in response toward each other and exchanged satisfied glances.

During the set, the first of many narrative arcs emerged across one of the multi-shaped projection surfaces hanging inside the concert hall. In this case, a gigantic Bambi-type festival logo with lifelike, blinking eyes was pierced by an embedded flying saucer in a prime example of the video-accents that accompanied many segments (flashback anyone, or where's the mushroom cart when you need it?). As blood flowed profusely, the Miss Unimoers mascot character toweled up the carnage and polished the ship. Roaring crowd or not, it was one hell of a spectacle that expanded foundational streaming possibilities. With PoiL's opening barrage, Moers was rolling. The sound of recorded applause, with a blackboard listing which previous Moers edition the canned claps originally came from, followed every set.

One of the weekend's more jazz-based acts was an excellent trio called "nine for three," comprised of Wolfgang Puschnig on saxophone and clarinet, Herbert Pirker on drums, with Wolfgang Mitterer on keys and wild, multiple electronic tools. Puschnig's horn ricocheted from smooth to jarring tones as the percussionists applied beats that echoed across a rapidly changing soundscape ranging from cosmic blues to acid bop, with bits of overlaying cinematic flourish via vocalized dubs reminiscent of John Zorn on Spillane (Nonesuch, 1986).

Free jazz improvisation by another trio, Grunen, with drummer Christian Lillinger, pianist Achim Kaufmann and bassist Robert Landfermann was another highlight. In all, forty-five different shows and hundreds of performers made for a truly full festival offering.

While streaming broadcasts remain the current mode of experiencing "live music" for the immediate future, the depth of production and amount of participating performers booked for Moers signaled a step back to pre-pandemic conditions. A big factor in Moers' 2020 success resulted from the expertise and creativity honed through having already streamed many of the festival acts in recent years with impressive results.

Artistic Director Isfort described the successful process to All About Jazz.

"At the beginning of the year when the number of illnesses in Italy increased dramatically and Lombardy was sealed off we decided the Moers Festival 2020 would (still) take place. Nobody knew at the time how the situation in Germany would develop, that's why we designed different scenarios. We presented the plan to make a festival without an audience as an elaborately produced live stream with TV channel Arte Concert, to our media partners, sponsors and the city of Moers. We got a "yes" answer and everybody was thrilled to finally have something that would not be cancelled. With this great support backing us we developed our plan piece by piece."

"It wasn't only the sponsors and partners, the musicians supported the new format from the very beginning. Additionally, the Moers Festival was presently one of the few sources of income for the artists, so many of them were very happy to be with us. Since we have to limit ourselves almost exclusively to artists who live in Germany it is a realization of how strong our musical scene is."

"Our audience was also very happy the festival was happening. We received a lot of positive feedback, and a great amount of people didn't request refunds and donated tickets that had already been purchased. That helps us a lot!"

Piano master Chilly Gonzales seemed to sum up what many performers were feeling. "I was very glad to have even the fifty people that were here," said Gonzales. "It was nice for my mental health just to be able to practice my craft in front of an audience."

At first, all the masks around looked very unusual on people but now we know how that perception would change. Early in the pandemic people also seemed quite amused to bump elbows as a greeting before standing apart but soon everyone was acclimated to the routine. While pandemic protocol was still strictly observed, a less formal mood set in. Even under greatly restricted conditions that included constant disinfectant monitoring, Moors had taken a big chance.

It was still a few weeks before the ultimate result of a bold decision would be known but to be at Moers last year felt groundbreaking, and subsequent events bore that perception out. Moers' gamble paid off, as the online, international response was overwhelmingly positive. Viewing numbers tracked consistently at well over 100,000 fans, with glowing posts from all over the globe. The best news was that in the weeks after the festival there were no reported Covid cases among workers or attendees. Let's hope that somewhere in the "Moersiverse," the Bambi keeps dancing.

The precarious process of easing governmental restrictions on large gatherings like concerts or sporting events is still being debated and such events remain prohibited in much of the world. As a result, for the time being many festivals are still switched to a "virtual" format and have followed a trail blazed by the optimism in Moers. It stands as impressive testimony that during the last year very few festivals have come close to matching the vibrant scene that occurred in Moers, when almost everything about the Covid-19 pandemic was unknown territory.

The 2020 event wasn't what anybody wanted but at least there was hope, and through the dedication of volunteers, staff, and musicians, there was plenty of that. Enough in fact, to serve as a model that would remain valuable for the rest of the year, and beyond.

Now, halfway through 2021, the US major concert scene is finally starting back up while other nations seem poised to follow. Still, it's a slow, uncertain process and many cancellations and restrictions remain. For this year's 50th anniversary, Moers continues to evolve, applying imaginative innovation to harsh medical realities and strict legislative guidelines.

About the only thing missing at Moers last year was the communal energy that exists in a traditional concert setting, and just in time for the 2021 edition German authorities loosened restrictions enough to allow limited audiences at open-air shows which make up almost half of the scheduled acts.

Shows scheduled for the indoor performance hall, including a solo set by Brad Mehldau, will remain closed to the public but once again the entire festival will be streamed free online. Time and traditions may change, but luckily we can count on the Moers Festival to stay at the forefront of music-based artistry, whatever the future may hold.