By Phillip Woolever
September 27, 2018
Sign in to view read count 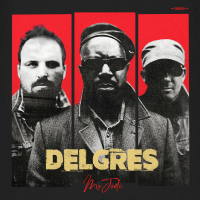 The France-based trio Delgres have successfully created one of the year's strongest all round albums. Sung mostly in Creole, the project's heartfelt social statements come through clearly in global terms nonetheless.

The band is named after Louis Delgres, an infantry officer who died in the rebellion after Napoleon's 19th century campaign to reintroduce slavery in the French Caribbean. Typical themes involving romance or infatuation are tightly surveyed with a sweet, amplified dobro twang and covered with rugged grace and dexterity.

The opening "Respecte Nou" has a thumping, gut-bucket beat harkening to rockabilly. Roughly translated lyrics like "We've been down too long, now we have to wake the hell up" harden a political stance. The album gains momentum like Bo Diddley with a chainsaw set to full Creedence Clearwater chug on the following title track. By now anyone who appreciates balls-out blues, full-tilt New Orleans funk or hard southern soul with a Caribbean acid tint should be hooked. "Mr. President" is a hyper-hypnotic chant that carries a personal note: "Me I don't know shit, I'm just a musician, all I can do is sing, but I did vote for you." "Living on the Road" offers lightly laid back reggae and folk, with Rafgee on a soft trumpet contrasting his more usually thunderous sousaphone tones. "Hold Me Tighter" is a tragic heartbreaker about lovers facing death and saying goodbye, with guest Skye Edward singing the female half of the equation.

One of the album's strongest cuts, "Can't Let You Go," hints at tasty tidbits from southwestern US bands like Los Lobos or Los Lonely Boys. The subdued reflection "Take Me Back" is the only tune sung mostly in English. "Each and Every Day" is a honey that stings with hope, optimism and highly effective irony, a powerfully touching testimonial from the perspective of a soldier who may be about to die.

The closing "Forgive Me" is another ballad; a breakup song with flugelhorn accents. Fifteen seconds pass at the ending before a fitting, half-minute coda that cements the project's vision. The album's total time is approximately 44:21. There are popular, multi-platinum catalogues that barely match up.

This entire gem features a minimum approach with maximum attitude. The dynamite in a small package formation blows away other recent blues or rock releases that get lost in oversized, overproduced messes. It doesn't take exaggerated vocabulary or hyperbole to thoroughly describe Delgres. For the recording and the group themselves, a little bit of truth goes a long way.