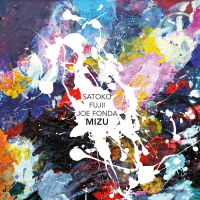 Listening to Mizu, it is hard to believe that, just two years ago, Joe Fonda and Satoko Fujii were not only unacquainted with each other, but also with one another's music portfolios. With their Libra label debut Duet (2016) and their recent Libra trio collaboration Triad (2018) with saxophonist Gianni Mimmo, it rapidly became apparent that these very different innovators shared a common bond resulting in some very remarkable music.

Mizu—the Japanese word for "water"—is the seventh installment in a year-long, monthly release project celebrating Fujii's sixtieth birthday. Lest listeners be concerned that Fujii's creative well would begin to run dry, this album continues to spotlight a tireless, one-of-a-kind musical force whose composing skills mesh perfectly with her affinity for like-minded collaborators.

The collection features three extended works and the surprise here may be in the hints of classicism and overall reflectiveness of these improvisations. Mizu is bookended by two twenty-plus minute pieces; the first, "Rik Bevernage," dedicates its first half to unusual and subdued constructs before Fujii's quirkily lyrical solo. Fonda takes up the bow and the remainder of the piece takes a wary, searching approach as the duo dance around each other's experiments. "Long Journey" begins quietly reserved, then becomes a Keith Jarrett-like romp and one of Fujii's most accessible and groove-oriented numbers. The album closes with the title track, a self-contained suite that offers additional Fonda chants and flute work in an often atonal setting.

Not only is Mizu the best work this duo has produced, but it holds promise for what has quickly become an exceptional creative partnership. While Fujii emphasizes that the pair are operating on level footing, there is no doubt that her piano work, here confined mostly to the outside of the instrument, is among the finest of her career. A terrific album.