BY MARK CORROTO
September 14, 2011
Sign in to view read count 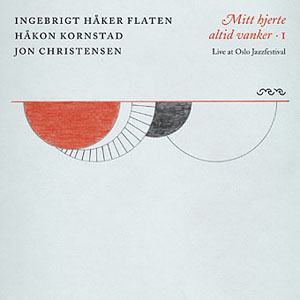 If folk music is music of "the people," then certainly adding the designation of "jazz" is a redundancy. When a jazz trio such as that of bassist Ingebrigt Håker Flaten, saxophonist Hakon Kornstad and drummer Jon Christensen performs traditional Norwegian folk music, it is both reaffirming the oral (or aural) tradition of the music and the human context (or familia) of sound and improvisation.

The music heard on Mitt Hjerte Altid Vanker I: Live At Oslo Jazz Festival (My Heart Stood Still) is the trio's interpretation of six traditional Norwegian folk tunes plus Keith Jarrett's "Death And The Flower," which certainly has, itself, passed into the American folk tradition.

Kornstad and Flaten have played these folk tunes in a duo before, last heard on Elise (Compunctio, 2008), but where that disc relied on each player's experience—Flaten in Atomic, The Thing and various groups organized by Ken Vandermark, and Kornstad as a noted solo performer—Mitt Hjerte Altid Vanker pulls together a more dutiful offering of the tradition.

Recorded at the Oslo Jazz Festival in 2009, the duo added the renowned Christensen—practically the house drummer for many ECM recordings in the 1970s, '80s and '90s—to the stage. Here, he brings a quiet calm to the date, legislating space and a sort of quietude. For a live recording, this disc has a pristine sound, with each player given equal space to be heard, soloing sparingly, and instead opting for a group interpretation.

That said, the accents of Kornstad's tenor and flutonette (a flute with a clarinet mouthpiece) are distinctively his own. His sound comes from a chilled Pharoah Sanders, one familiar with extended technique but opting for cogency. Same for Flaten, who tames his technique in service to the traditional folksiness of the sound.