By Woodrow Wilkins
June 8, 2008
Sign in to view read count 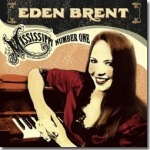 To some, she's "Little Boogaloo," a nickname she earned through her long association with instructor, mentor and friend Abie "Boogaloo" Ames. But whether called by that or her own name, Eden Brent is a Mississippi Delta artist whose love for her home is as strong as her passion for singing.

Brent, a vocalist, pianist and keyboardist, has a penchant for blues, jazz, pop and oldies, among other styles. In addition to numerous performances with the now-deceased Boogaloo, Brent has performed all over the Deep South and has toured Europe. She was the 2006 winner of the Blues Foundation's International Blues Challenge for solo artists, and is represented on the Blues Walk in her hometown of Greenville, Miss.

Mississippi Number One is Brent's tribute, not only to her homeland but also to the lesser-known of two roads that pass through the Mississippi Delta, routes that covered the historical blues artists' path as they played clubs in the region.

"Mississippi Flatland Blues" is an up-tempo lament about a way of life in Brent's home, where major manufacturers have shut down over the years, putting hundreds out of work in an already impoverished area. "I got the Washington County / my factory done shut down blues," she sings, backed by Jimmi Kinard on bass and James Robertson on drums. The music is so lively one would be hard-pressed to detect anguish, despite the lyrics.

The high-energy title song honors Mississippi 1, a highway that, except for a few miles as it passes through the Greenville area, is a two-lane road. Brent sings of mimosa trees, the Winterville "Indian" Mounds, and a thousand bluesmen who lost their lives by "fooling around with someone else's gal." The song also gives a nod to U.S. Highway 61, the "officials" blues highway. Brent's singing and lyrics give this song its edge, but Kinnard's bass line and Robertson's drum help make a good song even stronger.

Another Eden Brent original is "Meet You Anywhere," a sassy tune about a fella she's anxious to hook up with. This time, she's backed up by Sam Shoup on double bass, Tom Lonardo on drums, Marc Franklin on trumpet, vocalists Jackie Johnson and Reba Russell, and Jim Spake, who doubles on tenor and baritone saxophones. It's one of the more lighthearted songs on the album, highlighted by Brent's piano solo near the end.

Brent wrote five of the fifteen tracks; three songs were written by her mother, Carole Brent. The rest cover a variety of songs, including the Gershwin brothers' "The Man I Love," and "Careless Love," a traditional song that was preserved by famed bluesman W.C. Handy.

Brent employs a variable lineup of side musicians. On some tracks, she presents a simple trio, on others, she solos, plays a duet or is joined by a larger ensemble. Whichever mode she chooses, it works. Mississippi Number One is excellent throughout.

Mississippi Flatland Blues; He'll Do the Same to You; Darkness on the Delta; Love Me 'Til Dawn; Fried Chicken; Mississippi Number One; The Man I Love; Careless Love; Meet You Anywhere; Why Don't You Do Right; Afraid to Let Go; Close the Door; All Over Me; Trouble in Mind; Until I Die.