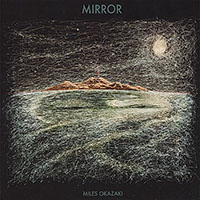 Sometimes artists' most obvious credentials say little about who they really are. Guitarist Miles Okazaki has been singer Jane Monheit's guitarist since 2002, but anyone who expects Mirror to reflect a similarly standards-heavy inclination will be seriously surprised. Whether or not in a good way depends on one's own predilections, but for those wanting greater breadth and depth, Okazaki's debut as a leader represents a welcome departure from Monheit's mainstream approach.

Okazaki's mathematical compositional approach reflects a passion for numbers that he's had since his teens. Irregular meters, winding themes and the confluence of contrapuntal phrases of varying lengths are all significant parts of his compositional style. It's no surprise that David Binney appears on half the disc, since Okazaki clearly views the altoist's innovative writing style as a reference point. Also featured: drummer Dan Weiss, who's popping up everywhere these days and plays in Binney's current touring group. Brief guest appearances by altoist Miguel Zenon and tenorist Chris Potter, both comfortable improvisers over knotty contexts, augment Okazaki's core quartet featuring Weiss, reedman Christof Knoche and bassist Jon Flaugher.

Other than the four-minute "Improvisation," cleverly based on John Coltrane's "Countdown," the balance of Mirror is characterized by improvisation over complex form. Defined structure may predominate, but Weiss is the X-factor, demonstrating a signature ability to maintain groove while playing with an open-ended elasticity and energy that few drummers, other than perhaps Brian Blade, can match.

Okazaki's penchant for bar-hopping unison or octave-apart saxophone lines also references Binney. Still, Okazaki leans at times to a stronger fusion-like intensity and overt cross-cultural interests. The aptly titled "Volcano" begins with a dark groove and Indo-centric theme. Okazaki's solo gradually builds with a grungy, Nels Cline-like skronk, ultimately settling into a wash of power chords under Weiss' explosive solo, before returning to a linear improv that's drawn to a close by Binney and Knoche's extended theme.

Elsewhere the album bristles with equal muscle, but Okazaki's also capable of greater finesse and more oblique melodies. His acoustic guitar drives the rhythm of "Spiral"—a 4/4 piece, but with shifting subdivisions kept off-kilter by Weiss' curiously staggered pattern and a lengthy melody that winds its way throughout its entire three minutes without repetition. Okazaki's Brazilian-informed nylon-string guitar segues into "Mirror I," which features another idiosyncratic melody where unison alto and soprano saxophones effectively break apart into harmony only rarely, and a potent solo by Zenon.

The composite approach of Mirror runs the risk of outweighing its value at times, but for the most part this largely continuous hour-long suite demonstrates how Binney's distinctive paradigm has become a new starting point for younger artists like Okazaki. Given this mature first effort, what will be even more interesting is to hear how the guitarist further departs and builds his own voice on future recordings.