By IAN PATTERSON
December 3, 2008
Sign in to view read count 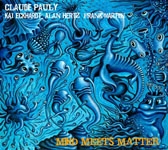 Legions of saxophonists were mesmerized by the sound of Lester Young and Charlie Parker and to this day, John Coltrane; for trumpeters, Miles Davis continues to ensnare many, and for fusion guitarists John McLaughlin and Allan Holdsworth continue to fascinate. As a bright light does moths, they are sucked in, and if not careful, their own voice is consumed in the flames of reverence. Mind Meets Matter reveals Claude Pauly—eyebrows singed—to be as talented as he is informed by these two great guitarists, although fusion fans will undoubtedly find plenty to admire in an energetic, promising debut recording.

Pauly steers his accomplished quartet through an array of moods and tempos which underline his compositional abilities. The subtle use of effects, Arabic and Indian vibes in palatable doses, and an emphasis on melody combine to keep the listener's attention for the entire hour of music, which is no mean feat in itself.

"Moorish Maze" begins with a wailing North African incantation; the deep-funk bass of Kai Eckhardt carries the music, and dabs of keyboards punctuate the guitar-led melody out of which Pauly's improvisation evolves. There is a slightly fuzzy, unclean edge to his guitar playing and an easy fluidity which makes for exciting soloing. Yet he never slides into indulgence, knowing instinctively when to hand over the baton; the ecstatic, guitar-like keyboard solo of Frank Martin recalls the halcyon days of Jan Hammer, and compliments the leader nicely.

The McLaughlin influence on "Quiet Moves"—where at one point the guitar uncannily recreates the Mahavishnu Orchestra circa Birds of Fire (Colombia, 1973)—is evidence not only of the stepping stones to Pauly's sound, but a reminder of the seemingly ever-growing influence of McLaughlin's ground-breaking group of the 1970s. Pauly's bold and imaginative solo, which dominates the second half of the song, shows that technically he is up there with the best of them.

It is not all dazzling runs and intervallic leaps, as Pauly reveals a deft touch on acoustic guitar on "Sheep's Clothes," a track where Kai Eckhardt's enviable fretless skills are to the fore. These days Eckhardt is stirring things up in funk/jam oufit Garaj Mahal with drummer Alan Hertz, but he is most comfortable in an acoustic setting, having made up one third of John McLaughlin's excellent late eighties trio along with percussionist Trilok Gurtu. Martin's keyboards add both lyricism and a slightly darker edge to an impressive tune which holds quiet power.

The keyboard intro to "Haunted" again conjures McLaughlin, whose compositional nuances influence Pauly as much as Holdsworth's sound. The atmospheric intro to "The Mirror Trail" leads into a melodic passage and in turn a more urgent statement from the guitarist, but in the end the melody wins out, and the album closes on a reflective note.

Claude Pauly's debut delivers much, and carries the promise of still greater things to come. One suspects that it is only a matter of time before he is creating a fire all his own.