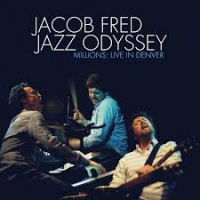 Long associated, for better or worse, with the so-called jam band phenomenon of the mid-to-late 1990s, the Jacob Fred Jazz Odyssey continues to generate intelligent, daring, genre-defying music. JFJO's first live recording in a decade or so, Millions: Live In Denver, is part celebration of their 20th year of existence and part revelry in their new sound: a pared-down lineup of keys, drums and guitar. The Tulsa, Oklahoma-based brainchild of keyboardist and composer Brian Haas, JFJO has gone through a dizzying number of personnel changes and instrumental configurations over the years. Starting out in 1994 as a funky octet with MCs and a horn section, they stripped down to a bass-drums-piano trio, then expanded to a quartet, then added a horn section for the thunderous Race Riot Suite (Kinnara Records, 2011) before tossing the horns and the bass entirely. Recorded at Dazzle Jazz, Millions: Live In Denver is also a fond look back on their own repertoire of original compositions, all fan favorites from throughout the band's history.

Though they've delved into everything from free improv to post-rock to stride piano to Okie funk, Millions: Live In Denver is more-or-less in the sort of freewheeling, noise-splattered jazz-rock pocket inhabited by the likes of Garage a Trois, Critters Buggin', The Dead Kenny Gs, and any number of bands on labels such as Cuneiform and MoonJune. If you listen to their back catalog, it's clear that Haas has always worked from within the jazz continuum, even though their music goes quite far out on various stylistic limbs. On Millions: Live in Denver JFJO's exuberant interplay animates some their most pungent and infectiously melodic pieces. The sound of the new lineup is distinctive as well. Chris Combs' sliding lap steel wheels, wails and fragments over Josh Raymer's filthy, funky drumming. On conventional electric guitar, Combs stirs up sheets of gritty distortion behind Haas' hyperactive keyboard figurations, and plucks delicate counterpoint to the pianist's melodic inventions.

While the band doesn't have a full-time bassist, saying that the music lacks a bassist isn't correct at all. One of the few keyboardists I know of who unabashedly professes a love for the lower registers of his instrument, Haas clearly relishes the abrupt, burping bass tones produced by his Moog Phatty. His use of the keyboard bass is judicious, however, and Combs often picks up a bass line on his guitar during Haas' solos. Just as often, however, they leave the bass out entirely to open the music up in distinctive and unexpected ways.

The performances on Millions: Live in Denver are both eclectic and electrifying. "Muskogee Smalls" twists a healthy dose of stride piano into cartoon-like funk. Haas' stays with the acoustic piano on "Slow Breath, Silent Mind," turning in a sparkling, inventive solo over Raymer's churning polyrhythms and Combs' surging low-end guitar lines. "Skeeball Over the Ocean" (originally on Walking With Giants, Hyena Records, 2004) is the sort of high-energy Middle-Eastern-tinged electric space jazz one finds on the Tzadik label. Here, Combs' guitars carry the day, infusing the tune with a palpable sense of bluesy yearning. Similarly electric and energetic is "I Love Steve Haas," which goes through numerous breakdowns and buildups, nearly spinning off into free jazz territory before Haas' chiming Rhodes melody fetches it back. "Grub Ridge Stomp," originally presented on All Is One -Live In New York City (Knitting Factory Records, 2002), pinballs back and forth between two or three distinct harmonic / melodic kernels, slowly mutating each one while mixing and matching electronic and acoustic sounds. Their version of "Tae Parade" from Lil' Tae Rides Again (Hyena Records, 2008) is quite a bit looser and jazzier than the original, with Haas and Combs circling around each other rather than taking discrete solos. Combs' distinctive guitars are front and center on "Sean's Song" until Haas thunders in with more of that funky stride thing he does; the piece-and the album-dissolving organically and somewhat gently, a fitting end to a wild ride.