By William Carey
January 21, 2012
Sign in to view read count 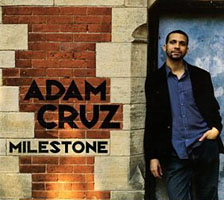 Inevitably, with the release of any recording done under a drummer's leadership, there is discussion over whether it is a drummer's record or not—understandable in that drummers are the great unsung heroes of most recordings and it is always exciting to have the opportunity to "give the drummer some," in the words of the great Maceo Parker. What this means however, is far from clear. Is it that the drummer has written the tunes or takes a lot of solo space—or perhaps it could mean that the timekeeper is leading the band through a workout of a myriad metric changes?

Perhaps the most well-known of modern jazz drummer-led bands is Art Blakey. Elements of the Blakey model are at work on drummer Adam Cruz's Milestone. First and foremost, he has assembled a great band. Art Blakey's The Jazz Messengers, throughout all of its various incarnations, were hot. Blakey lit a fire under them and trusted them to go. The same is true of the messengers assembled by Cruz for here/. The drums announce the beginning of the music and we're off. It doesn't take long for the boil to begin with tenor saxophonist Chris Potter and pianist Edward Simon performing brilliantly throughout.

Perhaps what makes for a drummer's record is nothing more than outstanding drumming? Cruz is the real deal, his bona fides will speak for themselves, and this record is no different. He plays with soloists effectively, has a seemingly endless arsenal of fills to play over vamps (a favorite Blakey-ism), and knows just when to bring the heat and when to cool it off a bit.

What makes this a truly special outing is the song selection: all original compositions, all penned by Cruz, all very solid. With melodic and harmonic interest and pretty ballads, Cruz demonstrates surprising depth and maturity for his debut as a leader. Whatever criteria might be used to define a drummer's record, this is it—and it is also just a very good record.