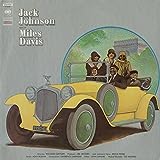 Well, here it is, finally: the Miles Davis album A Tribute to Jack Johnson , newly remastered and affordably available to those unwilling or unable to pay for the five-disc Complete Jack Johnson Sessions , which has been available since 2003. That's been Columbia/Legacy's modus operandi for Bitches Brew , In a Silent Way , and now Jack Johnson : put out the box set and after a suitable, cash-draining interval, cough up the remastered album alone.

Jack Johnson 's re-release (more accurately at this point, re-re-re-release) begs a few questions. The first would be a consumer's query: is there any reason for anyone with a previous edition of this album—say, the 1992 compact disc version—to purchase this one? The answer is a tentative yes. Next, one must ask whether there is anything left to say about an album released in 1971, widely reviewed at the time, and, as fusion music's credibility waxed and waned and waxed again, reexamined repeatedly by critics and fans. And the answer is, well, sure! To those that appreciate it, Miles' electric albums are deep , endlessly mysterious; one can dwell within them for long periods. Nowhere is this more so than with the chromatic Kabbalah of Bitches Brew , the Miles studio album that preceded Jack Johnson (you can spend hours, say, just sitting around debating what key , if any, those tunes are in), but Jack Johnson is its own object of cultic fascination.

For the uninitiated, let us state that the real substance of Jack Johnson was recorded on April 7th, 1970 by what was, compared to the lineups that made Bitches Brew (which often had for example, three electric pianists per tune), a skeleton crew of a band: Miles on trumpet; John McLaughlin and his soon-to-be fellow Mahavishnu Orchestra member Billy Cobham on, respectively, guitar and drums; r&b electric bassist Michael Henderson; soprano saxophonist Steve Grossman; accidental walk-in Herbie Hancock on Farfisa organ; and, on "Yesternow," an uncredited Sonny Sharrock on additional electric guitar. There are two songs, each originally one side of a vinyl record: "Right Off," and "Yesternow," each about twenty-five minutes long. The music was recorded for the soundtrack of a documentary about boxer Jack Johnson, a black celebrity many years ahead of his time in terms of fearlessness and ostentation; obviously, someone Miles could relate to. The album, unlike Bitches Brew , sold poorly upon its initial release, lost in a flurry of new electric Miles Davis albums—and for the first time, competing fusion releases, often by former Miles sidemen.

John McLaughlin has stated that he spontaneously started playing the straight-ahead rock shuffle "Right Off" and that Miles, characteristically, went with it; in any case, this song is the closest thing to pure rock music Miles ever attempted. Drummer Cobham pounds out a simple (for him) backbeat and bassist Henderson just grooves along in a manner no jazz bassist ever could. It's too simple; jazz fingers would stray. Miles had told McLaughlin to play like he didn't know how to play guitar, and at this he fails miserably. He does succeed, though, in sounding unlike himself in many ways, sticking mostly to chordal comping and avoiding the dazzling signature metronomic runs he'd make so famous with Mahavishnu. His chords, though, aren't exactly Pete Townshend power chords, but rather a virtual guitarist's workbook of alternate voicings and substitutions. Miles' trumpet on this song is essential listening for any connoisseur of his playing: there's no trace of the pensive, sighing, squeaking hinge of previous acoustic recordings. Instead he offers pure power: blasting, thrusting runs of open horn. Miles' chops were in excellent shape at this time and he excels technically in long, exploratory, almost vicious soloing. That said, there is sensitivity and subtlety in his bent notes and slurs. Steve Grossman contributes rippin' soprano and a just-dropped-in-the-studio-and-forced-to-play Herbie Hancock invents a soulful solo on the cheesy (in lesser hands, anyway) Farfisa organ. All Miles Davis albums of this period are the final product of elaborate editing and postproduction work by Teo Macero, and "Right Off" has some fascinating, almost arbitrary Macero dropouts in the mix, where he removes Cobham and McLaughlin completely, leaving Grossman and Henderson alone in an artificial duet: outrageously ahead of its time.

"Yesternow" is more languid; certainly, its stuttering, slow-motion opening groove gives no impression of hurry. Yet this is by no means pastoral music and again, Miles' long solo runs are utterly masterly and unsentimental. The most interesting aspect of "Yesternow" is how all of its dramatic tension occurs in spite of its static, halting rhythm: McLaughlin and an uncredited Sonny Sharrock are building walls of electric noise (Sharrock seems to be playing his amplifier through his guitar, instead of vice-versa) yet Henderson seems to be in another studio, another city. Cobham's incapable of that level of insouciance (nor was he a new hire that had to obey Miles to the letter) and his fills and accents are fascinating; compared to his work elsewhere, though, he's Charlie Watts on this session.

Jack Johnson is a tremendous album, and in its particular concentration of biting, staccato rock (if this is rock/jazz fusion, rock is winning), it's unique in Miles' body of work. If it was meant to break through to rock audiences, it failed, and of course it did: while this is loud, amplified, improvisational music, it's too harsh and perhaps too black-sounding for fans of the Grateful Dead or the Charles Lloyd Quartet. And to me, Jack Johnson sounds best divorced from the various sections of recorded sessions that produced it. Wading through the hours of studio time that fill The Complete Jack Johnson Sessions —or The Complete Bitches Brew Sessions , or The Complete In a Silent Way Sessions —is fascinating, but to these ears, just blunts the impact of the actual albums. It compromises their mystery, like seeing the sawdust, discarded costumes and bored Teamsters backstage at a play.

So, should you purchase this latest one-disc reissue of Jack Johnson ? If you don't own it at all, absolutely and immediately. And if you have a previous edition (besides the 2003 box set), well, perhaps. This remastering is a bit crisper, more forceful, and the details—and this music is all about the details—stand out more palpably. It's certainly timeless, essential music.

So, apparently there was still something to say about this album, then, wasn't there?