By Glenn Astarita
March 1, 2000
Sign in to view read count 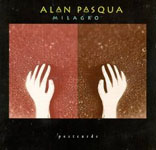 Milagro is pianist Alan Pasqua’s first date as a leader and a mighty impressive one at that! - Pasqua is an accomplished and much in demand jazz pianist who also shines as a composer on this gem while receiving first-rate support from the all-star rhythm section of bassist Dave Holland and drummer Jack DeJohnette.

Pasqua’s “Acoma” commences in the classic piano trio format, as the pianist exhibits his penchant for simply stated melodies along with spurts of ambrosial romanticism augmented by the sympathetic and astute work from Holland and DeJohnette. The much heralded tenor saxophonist Michael Brecker joins in on Pasqua’s pastoral yet soulful ballad titled, “Rio Grande” while the band take a bit of a U-turn on the modern bop-ish “The Law of Diminishing Returns”. Here, Pasqua reaps huge dividends from the piercing rhythms and Brecker’s hard-edged and ominous tenor sax performance yet Pasqua’s richly melodic lyricism counterbalances the thundering momentum via brisk, colorfully executed lines. The pianist’s melodious articulations become even more prominent on his stunningly beautiful composition, “Twilight” as the guest horn section supply the subtle tonalities via softly flowing charts whereas the somber choruses and sweet-tempered horn arrangements continue on the title track, “Milagro”. Once again, the music breathes life as though something grand or luminous was on the horizon. Pasqua’s vividly real, “Heartland” suggests open terrain or a yearning to return home as Pasqua and the horn section instill a sense of calm or quietude in conjunction with the pianist’s introspective and personalized approach.

On Milagro Alan Pasqua is a painter or sculptor of dreams as his finely etched lines, touching melodies and polished professionalism come to the forefront in magnificent fashion. With his second release for the Postcards label, Pasqua’s exquisite performances and picturesque compositions impart a lasting and unforgettable impression. Highly recommended. * * * * *