Mike Stern: What A Trip 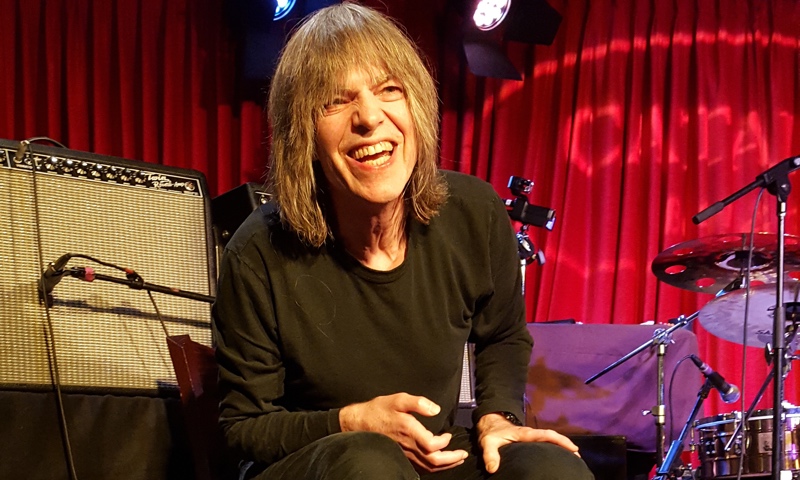 By JIM WORSLEY
September 20, 2017
Sign in to view read count
"I never trip. I just don't. But then, it just happened." This is how Mike Stern began his story as he explained to my wife and I how it happened.

If you somehow missed it, "it" refers to the tumble Stern took in July of 2016. This accidental fall resulting in both shoulders being shattered. In addition to the broken humerus bones and broken arms, he suffered serious nerve damage in his right arm and right hand.

My wife, Ronda, and I were so fortunate to be seated at a table in the front row at The Catalina Bar & Grill in North Hollywood. We were excited to be able to see and hear guitar virtuoso Mike Stern again. We knew we were in for a stellar night of live music with the formidable quartet also including Bob Franceschini on tenor saxophone, and the dynamics of drummer Dave Weckl and bassist Tom Kennedy rounding out the rhythm section.

What we didn't know was that we would be sitting within three feet of Stern's spot on stage. He came out before the show for the usual final check of his equipment. He said hello and a quick pleasantry to us and the couple sitting next to us. We didn't want to disturb him and didn't plan on saying anything further. In a few minutes, as he started to walk off the stage, he smiled at us and said, "I hope you enjoy the show." I replied that we were just so glad that he was able to perform. He of course knew that I was referring to the accident and was genuinely appreciative of that. It brought to his face that broad engaging smile of his. As he was about to take a step off the stage Ronda, bless her, asked how it happened. He easily could have kept going, pretending he didn't hear her or whatever without being the slightest bit rude. Instead he stopped, turned back and looked at us. Then proceeded back in front of us. He sat on a stool and told us the story. The simple fact that he did that was most kind and genuine.

He was in New York City, not far from his home, about ready to leave for a European tour when some errant construction debris altered his course. He fell backwards on both shoulders. One can only imagine how much that must have hurt. I mentioned that most people would have instinctively tried to put their hands on the ground to brace the fall. But keep in mind that these were no ordinary hands. These were the extraordinary and priceless hands of Mike Stern. So I asked in that blink of an eye moment if he thought of that and had chosen to take the brunt on his shoulders. He looked at me in way that would suggest that no one else had thought to ask him that question. He smiled insightfully and nodded in affirmation. Only his eyes spoke, as if to say "indeed."

He was engaged at this point and went on to tell us about the surgeries and many screws placed in his arm, all in attempts to alleviate and/or improve upon the nerve damage. "Oh, let me show you what I'm doing with my pick now," he said excitedly. He then used scotch tape and wig glue to affix a pick to his fingers. "It's the only way I can play right now," he added. He carefully demonstrated just how he does it, using his left hand to complete this process. It was a necessary adjustment due to the nerve damage. Sure enough, that is how he played that night.

As he arose from his stool he said, "By the way, I'm starting to work on a new record with Dennis Chambers." He said it not only excitedly but also in a manner that came across as if to let us in on something that wasn't public knowledge yet. I have to say, that was pretty darn cool! I, of course, told him that we would be very much looking forward to purchasing and hearing it. We thanked him profusely for spending the time with us and speaking so candidly. "Oh, THANK YOU!" he exclaimed. "Thank you so much for asking, and for your support." Imagine that, such a humble genuine man to be thanking us!

Leni Stern, Mike's beautiful and talented wife, was at the jazz club that evening. This was not an evening for her enchanting singing voice or exquisite guitar skills. She was there to support her husband. Her concern and love for him was readily apparent. Moreover, it was sweet and touching. With our close proximity to the stage it was moving to see and feel her emotion.

This is not intended as a concert review, so I will be succinct in that regard. Simply said, it was a great night of music. Weckl, Kennedy, and Franceschini were clearly prepared to support their colleague and friend both musically and emotionally. As for Stern, it must have been the scotch tape and glue....ha! Seriously, he/they were tight, melodic, inventive, and sensational. In other words, a "typical" Mike Stern show! After they played a couple of tunes we shared a laugh. Stern winked in our direction while holding up his right hand. This was body language for "Hey, look how well the scotch tape and glue is holding up."

After the show, once again there was Stern, shaking hands, posing for pictures, and thanking people for coming to the show. We figured that we had already had our moment in time and were slowly working our way through the crowd towards the exit. We smiled and waved to him as we noticed an eye contact, but we were still heading toward the door. He waved us over and said, "We need to get a selfie." After migrating over, Stern greeted Ronda with that big wonderful smile of his and said, "Hey Sweetie!" He put his arms around both of us for a photo. Fortunately a gentleman in the crowd offered to take the picture so we didn't have to wrestle with a selfie. Then, one last time, Mike Stern thanked US!

As we left the Catalina that night, we were speechless as to the events of the evening. Oh, we were already well aware of the huge talent and immense skills as a guitarist, musician, and songwriter. But the fact that his level of kindness, heart, humanity, and sincerity are all of that same level just kind of blew us away. No stuffed shirt super star here. I have a whole lot of respect and admiration for that.

As timing would have it, the aforementioned new record came out just this month (September 2017). In addition to drummer Dennis Chambers, Trip features a long and impressive list of musicians who contributed on this project. Yes, it is fittingly titled Trip. You have to love the self-effacing humor that amounts to making lemonade out of lemons. Those juices flow with such songs as "Scotch Tape and Glue" and "Screws." The record, in a word, is brilliant. I suppose better stated to say that it is "sweet!" 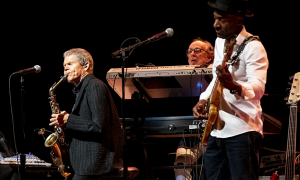