We all knew that when drummer Mike Clark came to the Douglas Beach House in Half Moon Bay, Calif., on Sept. 27, it was going to be a high-energy concert. This was true because coming in along with Mike were Donald Harrison on sax; Delbert Bump on Hammond B-5 organ and Steve Homan on electric guitar.

They eventually melded into a unit and presented a highly respectable show, giving the audience a lot to talk about after the evening was over. 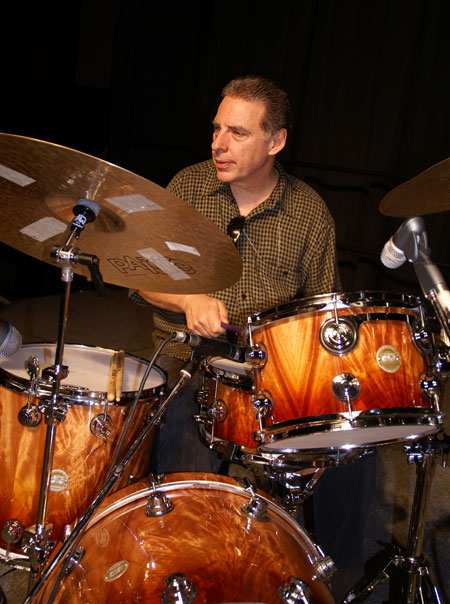 And yet, it took the quartet almost a complete set to come together as a working unit.

Although the high powered opening number—suggestive of things to come—was adequate, the band had to work too hard to find its voice. In "'Round Midnight," Clark settled back and used his trap set with a delicacy not often heard from drummers. Bump's Hammond surged to life in places. By the end of Monk's classic piece it felt as though the band had just begun to find its pace and the audience responded.

Unique to the set was a number that began with an organ and drum duo, gradually drawing in Homan's guitar. This grew into a multi-layered number with Harrison coming in on his sax, building the piece and taking it over the top. Clark's drumming was some of the finest ever played at the Beach House.

It wasn't until the second set, however, that without a doubt the band became a solid unit. Led by Donald Harrison's sax, the band's spirits shot upward as though there was nothing else left to do. Halfway through the first number, Harrison took over Clark's drums and showed that he was as competent on the drums as he was on his sax. With that, Delbert Bump soared on the Hammond, his facial expressions as wild as his fingers on the keyboard. Steve Homan is reminiscent of jazz guitarist Charlie Christian on his later recordings, with more of a rock edge to his playing. It was then that many in the audience began to move, bobbing their heads, dancing in their seats and being swept up by the music.

One of the things that stand out in Clark's musicianship is his careful and measured use of his cymbals. His tune "Loft Funk" was, overall, a hard-hitting piece although there was ample room for the delicate side of his cymbals. Everyone in the band took turns playing off of one another in a free flowing, up-beat mood. When the number was over and the uproarious applaud had ceased, Clark said, "Gonna have to play that solo again. I left a note out." He has that great humorous side to himself and it punctuated the show every-so-often.

The second set was by far the best of the concert. From raucous to mellow and everything in between Mike Clark delivered an afternoon and early evening that will stand with the audience as one of the best. Indeed many gave Clark and his band a standing ovation. On their way out from the Douglas Beach House that evening, one could hear people reflecting, talking with intensity in their voices about what they had just experienced.