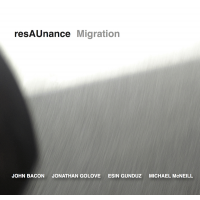 Highly emotional and ravishingly beautiful, Migration is a feast for the ears and heart. Performed by resAUnance, a cooperative quartet, which began as a trio comprised of vibraphonist/percussionist John Bacon, vocalist Esin Gündüz, pianist Michael McNeill with electric cellist Jonathan Golove added later, this combination of unique instrumentation and innovative musicians has created an astonishing multipart sonic poem.

Each player brings their own identity to the group. Gündüz has one of those magical voices which can be completely pure one second, only to throb with emotion the next when singing words or vocalized syllables. Bacon uses the vibraphone almost as an electronic instrument, with the high sustain and soft mallets producing glistening curtains of sound. McNeill's piano playing is carefully crafted to complement the vibraphone when they play together. Fitting between and around all of this is the electric cello of Golove that can sing lines, alone or around the others, or provide a bottom.

The six tracks include two compositions by Bacon, two by McNeill (including a reworking of "Wild Geese," originally from Flight) and two folk songs from Thrace, an area near the Bulgarian border with Turkey. However, the album has more of the feel of a suite rather than individual tracks; the group's multi-layered sound washes over the sound stage, allowing each piece to feel as if they run into each other.

Gündüz is magnificent throughout. The opening track, "Kizilciklar Oldu Mu," is a happy tune in 9/8, played often at weddings and deals with courtship and matchmaking. This mood changes in Bacon's astounding "Flame," the longest track; its words are an evocative love poem, with music that captures the essence of a flaming fire, which is both comforting and dangerous, constantly changing yet seemingly substantial, making it easy to get lost in its depths.

McNeill's "Wild Geese" opens with a wonderful cello solo, gradually blending with percussion, creating an aura of vast expanses. Piano joins in, and later vibes, building the tension. By the time Gündüz enters with her vocalizations, we are in flight, looking down on the sun-drenched ground below; the texture of the second half opens up and mountains loom in the distance. Quite an amazing track, and an equal counterbalance to "Flame."

The mood changes and becomes much more somber with "Bir firtina," which is a folk song about the displacement of the entire population of Thrace, then within the Ottoman Empire, in the years between 1878 and 1912. Gündüz singing expresses the anguish, pain and suffering of the people who lost everything: their homes, lands and families.

After the aural pallate cleanser of McNeill's "Interlude," which moves from sorrow to hope, Migration ends with the title tune. Vibes and piano set the sound stage wide open for more of Gündüz's vocalizing. This migration is one of nature, as Bacon makes the vibes sing at the wonder of it all.

Quite amazing music; mere words fail to describe its emotional power. Without a doubt a "Best Of" 2016.