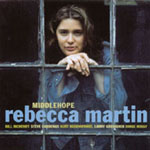 Here is another terrific example of why I, and others like me, bother to engage in this practice. An incredible talent, a remarkable spirit, a true artist of substance this close to being absolutely huge, but not quite-yet. She's one of the few that brings to the reviewer the simultaneous feelings of incredulity, at having the opportunity to make them more widely known, and gravity, in recognition of the heady responsibility that underlays the task of extolling them in credible fashion. I mean, it's difficult to get over the notion that everybody must know she's great already She was great with her band, Once Blue, who released a record on EMI in the mid 90's. That record featured Kurt Rosenwinkel, who is also part of the band here, and co-songwriter/guitarist Jesse Harris, who is currently playing a big part in the success of Norah Jones' debut record. Intimate, beguiling, personal, enticing, sensual, captivating, alluring-absolutely enthralling—wonderful even... Writing these words to describe the music leads me to actually seriously consider the question of whether a recording by a male artist is even capable of stirring such feelings in me (or any other heterosexual male reviewer, for that matter). No question, listening to this music produced a crush which will not be dissipating anytime soon. I mean, by the third song in - "The Midnight Sun"- when she sings, "Your lips were like a red and ruby chalice, warmer than a summer night", I was down for the count, and by the time I got to the middle part of the tune, where she merely hums the melody along with the saxophone, I just melted. And oh, so you too will melt, trust me. Nary six minutes of the disc (the Harris-penned "Then a Wall Came Up Inside Me" and the superb take on Cole Porter's "Ridin' High) break what could be called a mid-tempo sweat, but generate more heat - no let's call it provocative, personal, incendiary fire - than a lot of other jazz recordings will anytime soon. It's a delicately private date, alive with intensity and urgency, wherein you'll feel as though Rebecca has one hand around your neck and the other clasping one of yours so tightly that you might begin to dance with her as you feel the answer to the question she asks in the closing chestnut, "Where is Love?." Now some credit for the boys in the band, who really must get equal billing for creating the chamber-like, exposed vibe of this date. Maybe it's because most of them are her very close friends, like Rosenwinkel and the equally adept Steve Cardenas on guitar, Bill McHenry on sax and Jorge Rossy on drums. Perhaps it's because one is far beyond friend- her husband, bassist Larry Grenadier, who is well known for being equally as courageous as Rebecca in the face of intimacy with his other musical associates, Brad Mehldau and Pat Metheny. The jacket features a photo of the instruments propped up on walls and chairs in a small room-maybe Rebecca(and Larry)'s place-who knows? But it conveys the other kind of intimacy at play here- the relaxed, but incredibly tight-knit variety between all the musicians (including, of course, Rebecca). On to some of the sounds themselves. The guitarists are nicely paired here, with Rosenwinkel taking many of the longer solo excursions , such as on "The Sweetest Sounds" and "Ridin High" and linear fills (make sure to dig 'em on Dindi!) Cardenas provides nylon on "One Flight Down (a song Harris wrote for Once Blue, but donated to Jones' new disc, as well) and Dindi, sung gorgeously by Rebecca and Bill McHenry (on vocals, not sax!)in duet. On "Where is Love", the guitarists paint together in counterpointillistic hues, creating layers of unraveling harmonies. McHenry provides breathy, breathtaking, letter -perfect takes on these ballads, especially on "The Midnight Sun" where, two minutes in, he soars, flute-like, into the stratosphere, only to go heartfeltly deep moments later, intertwining romantically in the adoring, warm embrace of Rebecca's voice. It's Rebecca's record, so let's pause to dig the completeness of her game, shall we? She's definitely got the chops, but like her bandmates, is so far beyond thinking about them at this point, they're an effortless given. Phraseology? Part of the beguilement -explore it with me in the way she says/sings "to shine", in the phrase, "the stars forget to shine" (Midnight Sun), the pause in between the words "belong" and "to" in the phrase, "stories of love belong to you and me" (Dindi), or the way she pronounces the word "again" (as in wild, beguiled and whimpering, simpering) on "Bewitched". Efficiency? This recording was done on a single day-January 6, 2001. But it's the intangibles that convey and evoke emotion that make the great singers. I mean, truly-isn't that the essence of the mission of the musician as artist? Is it cliche to say that through their music, the best of them show us their heart, their soul, their most intimate feelings and make us feel them too? Hard to do-even more so on a (mostly) standards date, but achieved in 2002 here by Rebecca. Think of all the singers that have achieved that before-quick-now put her in their class.

The Sweetest Sounds; A Fine Spring Morning; The Midnight Sun; Dindi; How Do You Say Auf Wiedersehn?; Bewitched; Then A Wall Came Up Inside Me; One Flight Down; Ridin' High; Where is Love?.