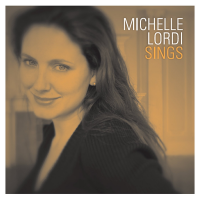 Michelle Lordi sings in a way that is uncommon today: simple, straightforward, direct, and conveying the emotions in the way we all do: in our voice inflections. No gimmicks. This is a style that emerged in the swing and cool jazz eras, a strict adherence to the tune that virtually vanished as singers began to add embellishments, scat, and too often a hysterical emotionality where personality crowded out the melody. In particular, Lordi owes something special to Chet Baker and Blossom Dearie. Baker sang with ultra-cool understatement, while Dearie, who accompanied herself incredibly well on the piano, emphasized swing and added an element of innocence. Cool uncorrupted understatement that swings is a way to describe Lordi's vocal style in a nutshell. Her voice is clear and never shrill, her diction is flawless, and she uses almost no vibrato. So what you get is the pure unadulterated song.

Lordi is graced to have two outstanding musicians to accompany her: Tom Lawton, a master of the piano and all its possibilities; and Aleck Brickman, a bassist with a precise yet lively rhythm that grounds the music and keeps it moving at the same time. You'll rarely hear piano accompaniment of a vocalist that is as good as Lawton's. One has to refer to Alan Broadbent's way of working with Irene Kral to find another example where the pianist is imaginative and evocative and yet complementing the singer so well rather than sticking out and intruding. This makes the album a pleasure to hear from beginning to end.

"There Will Never Be Another You" is a hackneyed standard that Lordi manages to make beautiful again. "Moon and Sand" is, by contrast, a rarely sung gem. If you listen carefully to "Everything Happens to Me" and "You Don't Know What Love Is," you can hear the ghost of Chet Baker singing softly behind it. "Moonlight Savings Time" is almost a transcription of Blossom Dearie's recorded version, and you could mistake it for her. As Gerry Mulligan said, when asked to describe her singing, "Blossom is Blossom!" But Lordi manages to capture some of her elusive uniqueness. "Between the Devil and the Blue Sea," taken in an up tempo is a lesson in how to make a tune swing. "Lover Man," a song that is often rendered in a maudlin way, is done thankfully straight up by Lordi. "Cow Cow Boogie" is a tune from the swing band era which all the divas sang at one time or another, you know, the one with the phrase "Cuma-Ti-Yi-Yi-Ay" loping along ad infinitum. Lordi sings it like the typical "girl singer" of that time, and Lawton's comping brings it forward a mite in time with his Oscar Peterson touch. "Skylark" ends the album where it began, with a fresh rendition of a standard from the Great American Songbook.

If you walk through a garden, the most beautiful flowers are the simplest ones that stand alone waiting to be picked. This album is one of those flowers.

There Will Never Be Another You; Moon and Sand; The More I See You; Everything Happens to Me; Do It the Hard Way; Moonlight Savings Time; You Don't Know What Love Is; Between the Devil and the Deep Blue Sea; Loverman; Cow Cow Boogie; Skylark.