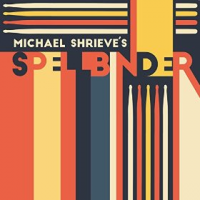 Drummer Michael Shrieve's Spellbinder is not your garden variety group. It's a beast of band that slams, seduces, grooves, jams, and rocks in high gear. Should we expect anything less from the rhythmic motor behind Santana?

While Shrieve is best known as the driving force behind that legendary outfit, both in its original Woodstock-era state and in its current reunited form, he's put his drums to good use in a variety of other contexts over the years. He made his mark in the world of fusion with Go and channeled his fire into prog rock with Automatic Man; he surfed through the world of new wave with Novo Combo and joined forces with other high profile artists like trumpeter Mark Isham and guitarists David Torn and Andy Summers for Stilleto (Jive/Novus, 1989); he teamed with a variety of creative renegades to create a twisted take on the jazz jam band under the banner of Trilon and delivered invigorating music with a global reach through Drums Of Compassion; and now he's taking the world by storm with Spellbinder's eponymous album.

This isn't Spellbinder's first rodeo-on-record—the band initially surfaced with the under-the-radar Live At Tost (Colorburst Soundfield, 2008)—but it's the first studio session for this fiery quintet. In documenting this music in such a setting, the band is able to get the perfect mix of polish and passion, harnessing fire without ever losing control of it. Shrieve and bassist Farko Dosumov dazzle with funky grooves, keyboardist Joe Doria paints various shades of sheen on the music, trumpeter John Fricke adds punctuation and spirit to these statements, and guitarist Danny Godinez provides class, rhythm and wildfire. But those descriptors are, obviously, a tad reductive in nature. Musicians like this, and a band like this one, avoid easy labeling, and that's always a good thing.

Spellbinder moves easily between worlds, shifting from caffeinated funk (Carlinhos Brown's "Pop Raladrao") to chilled-out zones (Monty Alexander's "Renewal") to nocturnal allure ("Triloni") and beyond during this program. In some instances a course is determined up front, cruise control is set, and the band just rides right down the highway. But there are also plenty of places where Spellbinder shifts gears. When you're dealing with an outfit that uses a slow-and-moody construct as an introduction to a Santana-esque conflagration ("1902") and moves from mannered to audacious realms with nary a problem ("Grump"), you just don't know what you're going to get. The one sure thing is that this group always lives up to its name.