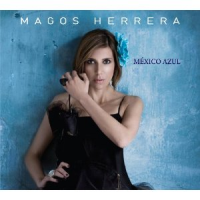 The sultry contralto cracks through the silence and a relatively new voce is discovered streaking across the skies of North America. This is the dark, sensuous voice of Magos Herrera, an outstanding young vocalist from Mexico. The constraints of singing in that register appear not to hold Herrera back for she often lets her voice soar free of the registers in which she is meant to sing. Her great leaps of gymnastic vocal skill are manifest throughout the woefully short and wickedly brilliant Mexico Azul.

Herrera has a distinctive vocal style. She has perfect pitch and hits quarter tones with electrifying regularity and almost too easily. She modulates her tones with subtle changes in attack and dynamics so that she is often loud and soft when negotiating a particularly difficult and longish passage. Herrera is also an outstanding interpreter of Latin American standards, in this case mostly Mexican music. She is stylishly narrative and with clever changes in vibrato, she highlights changes in emotion. Her sliding delivery—sometimes marked with a gust of hot breath—can quickly change the mood of a song and color it with noir tones; where it was once bright and glowing, it now becomes bleak and grayish and dull.

It is near impossible to single out one chart that is better than another, but "Noche Criolla," Tres Palabras" and the aching lament, "Obsesion" are unmatched for their grace, style of delivery and utter memorability. Of course it helps that Herrera is backed by a group of fine musicians, who are masters of understatement and know when to lay back and let a vocalist move forward.

These musicians feed off each other and all offer Herrera a fine vehicle from which she can take off into the azure, to flutter and fly above all else, yet sometimes to sweep down and grace the earth with fabulous narratives of her beloved Mexico. More—much more—is awaited form this sublimely talented vocalist.