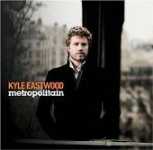 Eastwood and writing partner Michael Stevens have contributed to the scores for several of Clint Eastwood's recent films; among them: Changeling (2008), Flags of Our Fathers (2006), Letters From Iwo Jima (2006) and Gran Torino (2008). Don't get the idea that Kyle Eastwood is merely riding on his father's coattails. He paid his dues while living in the Los Angeles area for several years and then New York and Paris. Playing live gigs has given the young bassist and composer a wealth of experience upon which he rides comfortably on Metropolitain.

The hottest tracks feature Eastwood on electric bass with plenty of energy kickin' around. He solos comfortably on both electric and acoustic models, showing enthusiasm for the creative spirit that derives from a lifetime of listening. "Live for Life," "Rue Perdue" and "Le Balai" stand out as the album's most creative tracks.

With trumpet and piano trading fours on "Samba de Paris," Eastwood leads with majestic bass lines that tell a story of celebration and festivities. "Black Light" runs amok in 5/4 part of the time, representing an adventure that sends chills up and down the spine. "Hot Box" sends out a rhythmic message about jazz in today's entertainment world where instrumental music can tell a story completely, conveying an attitude faster than visual images.

Metropolitain has one track with lyrics. "Live for Life" allows vocalist Camille to express a poignant message of wishes fulfilled; take interest in yourself and live life as you please. She also raps a chorus in the song's midsection, emphasizing the central thought forcefully. Eastwood's music allows impressions to exist clearly, with a full-body experience that lives on through his jazz ideas.