By JOHN KELMAN
January 2, 2007
Sign in to view read count 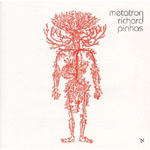 Amongst the multitude of guitarists developing individual voices through recognizable guitar sounds exists a smaller group of players who view the instrument as means to a different end. King Crimson co-founder Robert Fripp, one of the first to explore transforming the sound of a guitar beyond recognition, has been a major influence on more than one generation of guitarists with his tape looping Frippertronics and more recent Soundscapes. While French guitarist Richard Pinhas uses Fripp as a reference point, he has been developing Metatronics, his own extension of processed guitar, for thirty years. Metatron is his most fully realized solo album to date.

Fripp's improvised Soundscapes still lean towards thematic development. Pinhas doesn't entirely eliminate the concept of melody from the process, but he's just as likely to create a slowly evolving but static wash of sound. The three-part "Tikkun, which both bookends and divides this two-disc set into two halves, provides the best window into Pinhas' creative process. Instead of infinite loops, he achieves evolution as he creates new ideas while older ones gradually fade away. The individual ideas bear some harmonic reference, revolving as they do around a pedal tone. But the turbulent drumming of Magma's Antoine Paganotti and the bass playing of Didier Batard provide, respectively, disruption and simple harmonic movement to complement Pinhas' hypnotic audioscape.

But Metatron is not all about static landscapes and free-style drumming. "Moumoune and Mietz in the Sky with Diamonds has a solid rock groove and descending major scale that's as conventional as Pinhas gets. "Shaddaï Blues references Pinhas' '70s innovations, which would become one foundation of industrial music to come, while "Metatron/Shaddaï/Chabbataï approaches Fripp's melodism, but once again is defined by a firm rhythmic pulse that breaks its initial trance-inducing state.

What distances Pinhas' work from Fripp's is its collaborative nature. While this is not exactly a group record, and though his massive sound predominates, Pinhas is only completely alone on "Double Face of Metatron, where the innovations of Metatronics emerge at their clearest. Transcendent in its simplicity yet rich in its layers of dense sound, repetitive patterns and occasionally injected melodic non sequiturs, it contextualizes the rest of the album.

The emotional resonance of Fripp's Soundscapes make them difficult to treat as sonic wallpaper. At times approaching beauty, elsewhere more harshly angular, Metatron is even harder to ignore: this music constantly stretches the imagination and challenges the boundaries of convention.

CD1: Tikkun (part 1): The Unification of the Name; Aleph Number 1; Moumoune and Mietz in the Sky with Diamonds; Shadda