By GLENN ASTARITA
December 13, 2012
Sign in to view read count 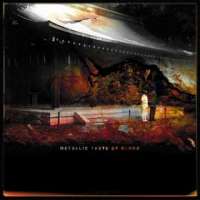 ADVERTISEMENT
The glistening audio engineering processes serve as an additive to the production. A dash of echo here, some reverb there amid highly amped bass lines intersperse with wistful electronics overlays and more. On "Schizopolis," the unit merges head-banging power riffs while Saft jockeys for position via his electronically treated harpsichord sounds to round out an avant-garde shaded spin on psychedelia. Then Saft launches "Glass Chewer" with an echo-laden classical piano opus, spiced with haunting effects atop the rhythm section's portentous grooves and Bernocchi's tremolo-induced guitar licks. The band touches on vintage King Crimson stylizations with bulletproof armor while also rocketing into the netherworld

The plot thickens with the scrunching and resonating dub vibe on "King Cockroach," as the group also merges broad synth passages with free jazz-like irony on the multihued "Twitch," where Saft's digi-strings and radiant textures ride above a pumped-up cadence. These artists occupy a forbidden zone of sorts, while tripping the night fantastic and possessing more than just a few deviously stylized tricks up their respective sleeves.

About Metallic Taste of Blood