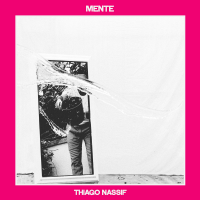 This is by no stretch of the imagination a jazz album, yet Brazilian singer, multi-instrumentalist and composer Thiago Nassif's Mente is so packed with risk-taking and invention that it is likely to appeal to a good number of AAJers.

From tropicalia, Mente careens on to its next fuelling station, the mutant disco, post-jazz and no-wave rock of New York's late 1970s ZE label and its motto: "fuck art, let's dance." Among the ZE artists evoked are synth adventurers Suicide, James Chance & The Contortions, Was (Not Was) (whose bassist Don Was is in 2020 president of Blue Note), Bill Laswell's Material and Arto Lindsay. And so the odyssey continues, with abandon.

Mente is co-produced by Lindsay, who has been collaborating with Nassif since 2016 and whose Brazilian production credits also include tropicalia luminaries Caetano Veloso, Tom Zé and Vinicius Cantuária. Cantuária plays drums on two tracks. Lindsay plays guitar on two.

Electronic keyboards and technology sculpt the big picture on Mente but traditional Brazilian hand drums, percussion and string instruments, and vocoder-free (hooray) vocals, add humanising flourishes. Lyrics are mainly in Portugese. But no matter. It is often an advantage not to be able to understand the words on music like this. Unless written by a poet such as Veloso, they can suck the magic out of it. Maybe Nassif is as talented a lyricist as Veloso, maybe not. Non-Portugese speakers will never know. But don't worry. Be transgressive.