BY C. MICHAEL BAILEY
March 21, 2015
Sign in to view read count
"The past is never dead. It's not even past." —William Faulkner, Requiem for a Nun 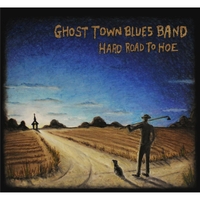 Memphis, Tennessee: The American South's conflicted Mecca. For its size and location, Memphis should be much more than it is. At the very least, it should be the rightful home of the Rock and Roll Hall of Fame. Cleveland? The reason? Cleveland was the home WJW disc jockey Alan Freed, who allegedly both coined the term "rock and roll" and heavily promoted the new genre—and that Cleveland was the location of Freed's Moondog Coronation Ball, the first major rock and roll concert, held March 21, 1952, featuring the Paul Williams Hucklebuckers and Tiny Grimes Rockin' Highlanders.

There is something about 1952 that rings a bit hollow. For one, it was not March 3rd or 5th depending on who you believe, 1951. That was the day that Ike Turner and Jackie Brenston recorded "Rocket 88" in Memphis, Tennessee. "Rocket 88" is considered in some quarters to be the first rock and roll recording made. But just for the sake of argument, 1952 was not July 5, 1954, the day Elvis Presley recorded "That's Alright (Mama)" for Sam Phillips at Sun Studios in Memphis, Tennessee.

But this missive is not about rock and roll (at least directly) and it is not exactly about Memphis, Tennessee. It is about what the blues has evolved into since the day Mamie Smith recorded "Crazy Blues" for Okeh Records (4169) on August 10, 1920...bringing us all the way to Memphis' own Ghost Town Blues Band and the recording Hard Road to Hoe.

Matt Isbell divides his time between making "cigar box guitars" and the erstwhile leader of the Ghost Town Blues Band, with the two functions intersecting often. They come together in a big way on Hard Road to Hoe, the band's third recording after Dust to Dust (Inside Sounds, 2010) and Dark Horse (Inside Sounds, 2012). The vibe this band waxes is one from the North Mississippi Hill country that spawned the likes of Mississippi Fred McDowall (Como, Panola County), R.L Burnside (College Hill, Lafayette County), Junior Kimbrough (Hudsonville, Marshall County). The roots band The North Mississippi Allstars (Hernando, Desoto County), helmed by brothers Luther and Cody Dickinson (sons of Memphis musician and producer Jim Dickinson), is a direct descendant of this tradition as is the Ghost Town Blues Band of the Allstars.'

This muddy roots music is shot-through with Memphis in the full horn section used and the bright and precise arrangements employed by them. The disc opens with a shovel breaking dirt. Guitarist Matt Isbell's self-made cigar box guitar bisects the sound with an organic humus timbre that builds to an overdriven vamp that stomps everything around it into dust.

The cigar box guitar is the bastard child of the old diddley bow, an consisting of a single string of baling wire tensioned between two nails on a board over a glass bottle, which serves as both as a bridge and as a means to magnify the instrument's sound. The diddley bow was used in the rural south and influenced the development of the blues sound. Isbell's cigar box guitar, a primitive chordophone that uses an empty cigar box (of something resembling a cigar box) for a resonator, sports three strings, typically the A, D and G strings from a standard acoustic guitar set, Tuned to an open key such as A (A-E-A') or G (G-D-G').

With this homemade instrument, Isbell divines the rich, peaty heart of the Mississippi Delta, sanctifying it in its delivery. But, he is not all about the cigar box guitar. Isbell is quite accomplished as a standard and slide guitarist. As a composer he mixes things up with straight-ahead rock and roll ("Big Shirley"), a Professor Longhair—Fats Domino jaunt ("Tip of My Hat"), and minor-key blues ("Nothing But Time"). Isbell provides that muddy cigar box sound to "Dime in the Well" adding a little drama to the arrangement with a double-time break that shifts things into overdrive. This is meat-and-potatoes music. It serves a purpose to our collective unconscious, like a squirt of adrenalin after midnight and before the cock crows. 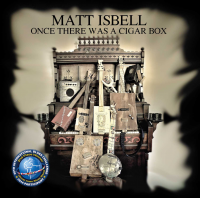 Matt Isbell
Once There Was a Cigar Box: A Film about Building Cigar Box Guitars
Directed by Alexander Conrads
Self Produced
2015

Once There Was a Cigar Box is a short documentary about Matt Isbell and his trade as a cigar box guitar luthier. There is plenty of information about his method and the history of the instrument. With Memphis as a backdrop, the brief piece rings true with contemporary music presented in living color and not as a sepia-museum artifact. This is where music, business and fun meet in the city that gave us rock and roll.