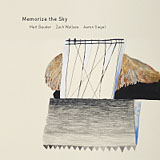 Searching for a cosmic balance, woodwind player Matt Bauder, bassist Zach Wallace and drummer Aaron Siegel spread their improvised music out like the heavens above. Soft as clouds and containing enough space to let their thoughts commingle gradually, the session rides on a feather chariot.

Bauder plays tenor saxophone, clarinet and bass clarinet on this, the trio's first full-length recording. Both Wallace and Siegel add vibraphone to the arsenal, while all three contribute quaint percussion effects. Like the name that they've chosen for this decade-old trio, Memorize the Sky, the music remains soft and fluffy with just enough motion to remind you that it's very much alive.

Drones carry most of the album with percussion punctuation marks blended in randomly. While the woodwinds, bass and vibraphone are certainly capable of a melodic phrase, the trio prefers instead to converse with grunts, groans, raspy chunks and somber tones. Wallace's bowed bass becomes an instrument for brief, detached moans. Bauder's tenor becomes a large mouthpiece whose purpose is to stop the tongue in accentuated darts. Siegel, who accepts his role as percussionist without meter or tempo, colors with a vast array of tools.

"Cloud of Clay differs from the rest and comes closest to traditional music, as the big, booming bass adopts a primitive tom-tom beat for six minutes while Bauder and Siegel throw random sounds around the room. A few of the noises that they add are so unique that they're difficult to identify but many have been overused in free jazz circles. This experienced trio has had plenty of time to explore the universe of unusual sounds. Their collaborative efforts would be best aimed at organizing these sounds in innovative ways.

Raft of Stone; Lake of Light; Etch of Wood; Field of Ice; House of Wind; Cloud of Clay; Brick of Fire; Path of Spider.